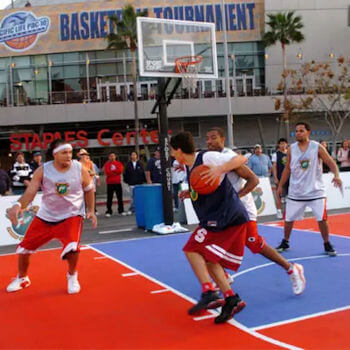 3x3 (pronounced 3 on 3, 3 by 3 or 3x3) basketball is a form of the game played three a side on one hoop. It is the largest urban team sport in the world (ESSEC study commissioned by IOC). This basketball game format is currently being promoted and structured by FIBA, the sport's governing body. Its main competition is an annual FIBA 3X3 World Tour, comprising a series of Masters and one Final tournament awarding six-figure prize money in US dollars. The FIBA 3x3 World Cups for men and women are the highest tournaments for national 3x3 teams.

FIBA releases from time-to-time a supplement to its official basketball rules specifically for 3x3. The rules state that regular FIBA rules apply to all situations not specifically addressed in the FIBA 3x3 rules. The current set, both in an abbreviated version and longer format, was published in January 2019.

The current rules depart from regular full-court basketball in the following ways: