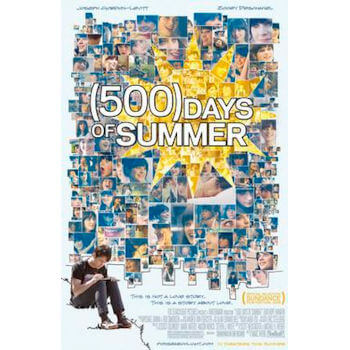 500 Days of Summer (stylized as (500) Days of Summer) is a 2009 American romantic comedy-drama film by first time director Marc Webb from a screenplay written by Scott Neustadter and Michael H. Weber, and produced by Mark Waters. The film stars Joseph Gordon-Levitt and Zooey Deschanel, and employs a nonlinear narrative structure, with the story based upon its male protagonist and his memories of a failed relationship.

As an independent production, the film was picked up for distribution by Fox Searchlight Pictures and premiered at the 25th Sundance Film Festival. It garnered favorable reviews and became a successful "sleeper hit", earning over $60 million in worldwide returns, far exceeding its $7.5 million budget. Many critics lauded the film as one of the best from 2009 and drew comparisons to other acclaimed films such as Annie Hall (1977) and High Fidelity (2000).

On January 8, Tom Hansen meets Summer Finn, his boss's new assistant. Tom is trained as an architect but works as a writer at a greeting card company in Los Angeles. After discovering they have a similar taste in music, they have a conversation about love at a karaoke night; Tom believes in it, but Summer does not. Tom's friend and co-worker McKenzie drunkenly reveals that Tom likes Summer, which Tom asserts is only "as friends", something Summer agrees with. A few days later, Summer kisses Tom in the copy room at work. During the next few months Summer and Tom grow closer.

Tom shows Summer his favorite spot in the city, which overlooks a number of buildings he likes, though the view is somewhat spoiled by parking lots. After several months of dating, both Tom's friends and his preteen half-sister Rachel push him to question Summer where they are in their relationship, though Summer brushes this off, saying that it should not matter if they are both happy. One night, Tom gets into a fight with a man who tries to pick up Summer in a bar, which causes their first argument. They make up and Summer concedes Tom deserves some certainty, but that his demand that she promises to always feel the same way about him would be impossible for anyone to make.

On day 290, they are hanging out in a cafe. Tom wants to go back to Summer's place but she insists on seeing The Graduate and weeps at the ending, which surprises Tom as he'd always thought it was a romantic fairy tale. They visit the record store, but Summer is distracted, appears to have lost interest in Tom, and kisses him good night. Tom tempts her with an offer of pancakes at a diner, where Summer casually announces that the relationship hasn't been working and breaks up with Tom while they are waiting for the food to arrive. Summer wants them to remain friends, but Tom is devastated.

Summer quits her job at the greeting card company. Tom's boss moves him to the consolations department, as his depression is making him unsuitable for happier events. Tom goes on a blind date with a woman named Alison. The date does not go well as he spends it complaining about Summer until an exasperated Alison ends up taking Summer's side. Months later, Tom attends co-worker Millie's wedding and tries to avoid Summer on the train, but she spots him and invites him for coffee. They have a good time at the wedding, dance together, and Summer catches the bouquet. She invites Tom to a party at her apartment and falls asleep on Tom's shoulder on the train ride back. He attends the party hoping to rekindle their relationship but barely gets to talk to Summer and spends most of the night drinking alone, until he spots her engagement ring. Tom leaves, close to tears. He enters a deep depression, only leaving his apartment for alcohol and junk food. After a few days, he returns to work with a hangover and, after an emotional outburst, quits his job. Rachel tells Tom that she does not believe Summer was "the one" and that his depression is being worsened by the fact that he is only looking back on the positive aspects of their relationship.

One day he suddenly finds the energy to get out of bed and rededicates himself to architecture, something Summer had pressured him to do. He makes a list of firms he wants to work for, assembles a portfolio, and goes to job interviews. On day 488, Summer is waiting for Tom at his favorite spot in the city and they talk. Summer says she got married because she felt sure about her husband, something she wasn't with Tom. She explains that Tom was right about true love existing; he was just wrong about it being with her. Summer puts her hand on Tom's and says she is glad to see he is doing well. As she leaves, Tom tells her he really hopes she is happy.

Twelve days later, on Wednesday, May 23, Tom attends a job interview and meets a girl who is also applying for the same job. He finds that she shares his favorite spot and dislike for the parking lots. As he is entering the interview, he invites her for coffee afterwards. She politely declines, then changes her mind. Her name is Autumn.