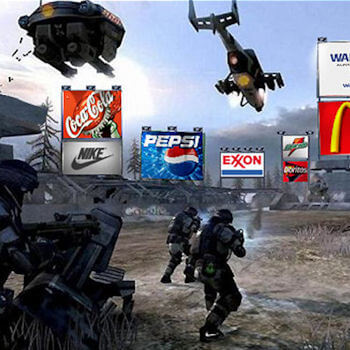 Advertising using games is a long-standing practice in the video game industry. Various methods have been used to integrate advertising into video games to advertise products, organizations or viewpoints.

Some companies and organizations expressly commission video games to promote a product or service. These games have been referred to as "advergames" (a portmanteau of "advertising" and "gaming") a term that was coined in January 2000 by Anthony Giallourakis, and later mentioned by Wired's "Jargon Watch" column in 2001. With the growth of the internet, advergames have proliferated, often becoming the most visited aspect of brand websites and becoming an integrated part of brand media planning in an increasingly fractured media environment. Advergames theoretically promote repeated traffic to websites and reinforce brands. Users choosing to register to be eligible for prizes can help marketers collect customer data. Gamers may also invite their friends to participate, which could assist promotion by word of mouth, or "viral marketing."

Games for advertising are sometimes classified as a type of serious game, as these games have a strong educational or training purpose other than pure entertainment.

Other methods of advertising in video games include product placement being integrated into in-game environments and companies/organizations sponsoring commercial games or other game-related content.

While other categories have been proposed, advertising in video games normally falls into one of three categories which are derived from a historical categorization technique normally applied to traditional media. These include both through-the-line (TTL) and below-the-line (BTL) marketing strategies.

The principal advantage of product placement in in-games advertising is visibility and notoriety. For advertisers an ad may be displayed multiple times and a game may provide an opportunity to ally a product's brand image with the image of the game. Such examples include the use Sobe drink in Tom Clancy’s Splinter Cell: Double Agent.

For some players, digital games are one of their primary forms of media consumption. Game playing is considered active media consumption, providing for unique opportunities for advertisers. While product placement in film and television is fairly common, this type of in-game advertising has only recently become common in games. The effectiveness of such advertising is debated by several scholars. Yang et al. found some types of recognition were low among college students, although players did retain word fragments in sports games. Grace and Coyle found that 35% of players could recall advertised brands in a controlled study of car racing games.

According to Forbes, In-game advertising is expected to reach $7.2 billion in 2016 since it is embedded in the entertainment as opposed to interruptive commercials which are skipped by DVRs or digital ads which can encounter ad-blocking software. A more recent example of in-game advertising is Google using video Ad in between levels of game play. Usually these Ads are branded inlined and according to Tech Crunch has the potential of gaining fast traction in Googles AdMob Service.

Examples of advergames include promotional software.

By employing advergaming, a company typically provides interactive games on its website in the hope that potential customers will be drawn to the game and spend more time on the website, or simply become more product aware. The games themselves usually feature prominent product placement, often as "powerups" or upgrades.

The earliest custom video games featuring integrated brand messages were developed in the era before substantial penetration of the World Wide Web and were distributed on floppy disk. These games were typically of a higher quality than the modern flash games and were distributed for free, often bundled with other products from the company advertised for. The first floppy disk advergames were developed to serve dual purposes—as promotional incentives that drive response and as media that deliver awareness. American Home Foods Chef Boyardee, Coca-Cola, and Samsung brands issued the first-ever floppy-disk advergames. Other early brands to use the format were Reebok, General Mills, the Gap and Taco Bell which distributed games as "kids' premiums." The first in-box CD-ROM cereal box advergames are General Mills's Chex Quest (promoting the Chex brand) and General Mills's All-Star baseball (starring Trix Rabbit and his friends playing baseball against Major League teams and stars).

Commercial examples are numerous and include advergames funded by Pepsi, 7 Up, NFL, Formula One, and Burger King. Political and military examples of BTL advergames include recruitment tools like America's Army, intended to boost recruitment for the United States Army, and Special Force, intended to promote Muslim resistance to the state of Israel. Educational advergaming is closely related to the Serious games initiative and falls under either Edumarket gaming or edutainment. Examples include Food Force (made by the United Nations's World Food Program) and Urban Jungle, an educational traffic simulation.

Examples of TTL advertising in games include "link-chases," ARGs, and viral marketing.

A rare form of advertising in video games, TTL marketing in games involve the use of URL hyperlinks within the game designed to induce the player to visit a webpage which then contains BTL advertisements. The technique used to tempt the player into visiting the intended URL varies from game to game. In games like Pikmin 2, the player is given a cryptic message with an accompanying URL designed to pique the curiosity of the player. In games such as Enter the Matrix, Year Zero, I Love Bees, and Lost Experience, URLs make up a part of the background of the game such that certain plot details can only be learned by following the link given in the game. The knowledge of such plot details are typically not required to complete the game, but make for a fuller story for fans. Websites of this nature often lead players on to other links which again lead to further links, thus earning these games the label "link-chases." The tradeoff for TTL advertisers is that though use of the internet to find out extra things about a game might be enjoyable, gamers will not enjoy being given too much of a run-around with too obtrusive advertising to obtain important details about the game. In another form, the URL might be part of a stage where a player can see it but it does not affect the plot. For example, in Super Monkey Ball 2, there is a stage where you can see clearly written on an obstacle a URL and the stage's name is even the word URL.