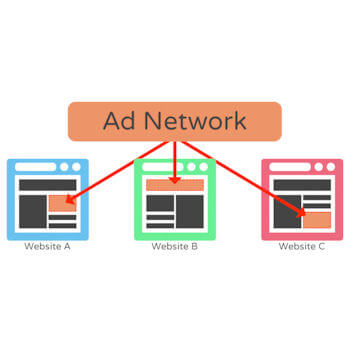 An online advertising network or ad network is a company that connects advertisers to websites that want to host advertisements. The key function of an ad network is an aggregation of ad supply from publishers and matching it with advertiser's demand. The phrase "ad network" by itself is media-neutral in the sense that there can be a "Television Ad Network" or a "Print Ad Network", but is increasingly used to mean "online ad network" as the effect of aggregation of publisher ad space and sale to advertisers is most commonly seen in the online space. The fundamental difference between traditional media ad networks and online ad networks is that online ad networks use a central ad server to deliver advertisements to consumers, which enables targeting, tracking and reporting of impressions in ways not possible with analog media alternatives.

The advertising network market is a large and growing market, with Internet advertising revenues expected to grow from $135.42 bn in 2014 to $239.87 bn in 2019. Digital advertising revenues in the United States alone are set to reach $107.30 bn in 2018 which is an 18.7% increase from 2017 ad spend. This growth will result in many new players in the market and encourage acquisitions of ad networks by larger companies that either enter the market or expand their market presence. Currently, there are hundreds of ad networks worldwide and the landscape changes daily.

The inventory of online advertising space comes in many different forms, including space on the desktop and mobile websites, in RSS feeds, on blogs, in instant messaging applications, mobile apps, adware, e-mails, and on other media. The dominant forms of inventory include third-party content websites, who work with advertising networks for either a share of the ad revenues or a fee, as well as search engines, mobile, and online video resources.

An advertiser can buy a run of network package, or a run of category package within the network. The advertising network serves advertisements from its central ad server, which responds to a site once a page is called. A snippet of code is called from the ad server, that represents the advertising banner.

Large publishers often sell only their remnant inventory through ad networks. Typical numbers range from 10% to 60% of total inventory being remnant and sold through advertising networks.

Smaller publishers often sell all of their inventory through ad networks. One type of ad network, known as a blind network, is such that advertisers place ads, but do not know the exact places where their ads are being placed.