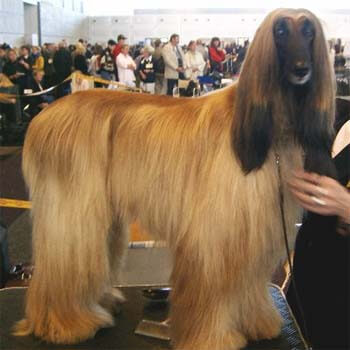 The Afghan Hound is a hound that is distinguished by its thick, fine, silky coat and its tail with a ring curl at the end. The breed is selectively bred for its unique features in the cold mountains of Afghanistan. Its local name is Tāžī Spay (Pashto: تاژي سپی‎) or Sag-e Tāzī (Dari Persian: سگ تازی). Other names for this breed areTāzī, Balkh Hound, Baluchi Hound, Barakzai Hound, Shalgar Hound, Kabul Hound, Galanday Hound or sometimes incorrectly African Hound. They have the ability to run and turn well. They are also 64 to 69 centimeters tall and weigh 23 to 27 kilograms.

The Afghan Hound is tall, standing in height 61–74 cm (24–29 in) and weighing 20–27 kg (44–60 lb). The coat may be any colour, but white markings, particularly on the head, are discouraged; many individuals have a black facial mask. A specimen may have facial hair that looks like a Fu Manchu mustache. The mustache is called "mandarins." Some Afghan Hounds are almost white, but parti-color hounds (white with islands of red or black) are penalized in the AKC standard, but not by the FCI. The long, fine-textured coat requires considerable care and grooming. The long topknot and the shorter-haired saddle on the back of the dog are distinctive features of the Afghan Hound coat. The high hipbones and unique small ring on the end of the tail are also characteristics of the breed.

The temperament of the typical Afghan Hound can be aloof and dignified, but happy and clownish when it's playing. This breed, as is the case with many sighthounds, has a high prey drive and may not get along with small animals. The Afghan Hound can be a successful competitor in dog agility trials as well as an intuitive therapy dog and companion. Genomic studies have pointed to the Afghan Hound as one of the oldest of dog breeds.

The breed has a reputation among dog trainers of having a relatively slow "obedience intelligence;" Stanley Coren, in his book The Intelligence of Dogs, ranked the breed last among 138 breeds mentioned in ability to understand and obey commands, requiring more than 80 repetitions to understand a new command and obeying on the first command less than 25% of the time. Coren noted that Afghan Hounds were consistently ranked among the least obedient dog breeds among all of the trainers he consulted, with a majority (121 out of 199) ranking the Afghan Hound in the lowest ten breeds out of 133 listed.

Although seldom used today for hunting in Europe and America where they are popular, Afghan hounds are frequent participants in lure coursing events and are also popular in the sport of conformation showing.

The Khalag Tazi is a variety of the Afghan. It was introduced to Europe in 1920 when an Indian Army officer, Major G Bell-Murray, brought some animals back from Afghanistan. Tazi is a current and ancient name for hunting dogs of the sighthound type in the Middle East. It has been used to denote the Saluki, Afghan, Taigan, Persian Greyhound, greyhound types of hound.

Bakhmull (also Bakhmull Tazi or Tazi Bakhmull, also called Aboriginal Afghan Hound) is a long-haired variety of sighthound, also classified loosely as a mountain dog (breed originating in a high-altitude area). It has been bred mostly in Russia and claimed to represent an Afghan Hound aboriginal to Afghanistan. In Pashto the word bakhmull means 'velvet', applied in reference to the dog's silky coat, which is rather abundant and long on the whole body, except the "saddle" (middle to lower back), front parts of all four legs, and the muzzle. Its color is always fawn, ivory, or white, with a darker "saddle", thus it produces an impression of a (yellowish) dog whose coat color matches the khaki sandstone and limestone of the Hindu Kush mountain landscape and deserts. The following colors are not permissible: red, red with white spots, black, and black with white spots. Since the 1980s, the centre of Bakhmull breeding is Russia, beginning in Moscow, then spreading to various other places in the CIS. The foundation stock was brought to Russia in the 1970s by military men returning from Afghanistan. Natalia Gherasiova (a breeder, of the Blue Dale el Bark Bakhmull kennel, and dog show judge) established the National Bakhmull Club, affiliated with the Russian Federation for Hunting Dogs (RFOS) and Russian Kynological Federation (RKF). A breed standard was first published in 1985, and a shared RFOS–RKF revision was produced in 1997.

The Bakhmull is expected to be graceful powerful, with a balanced and symmetrical appearance, and to exhibit predictable and comparatively intelligent behavior, including both calm and gregariousness around people (unless trained as a guard dog), and aggressive hunting in the field. Bakhmulls hunt solo and in couples. Although its coat is long, it does not require much grooming. Paws are well protected from injuries by "feathering" (thick additional paw fur). Its long, velvety coat and its stamina makes more suitable than many breeds for harsh weather. The breed standard calls, rather subjectively, for "aristocratic gait and a beautiful head with gazelle-like ... eyes". The eyes should be large, brown, slanting upwards, and of almond shape, with rims outlined black. Black coloration is a rigid must on the nose and lips for both white and fawn bakhmulls. Height: 68–73 cm (27–28.5 in.), bitches 65–70 cm (25.5–27.5 in.). The height at the withers is 3–4 cm higher than at the croup. A Bakhmull's gait should be easy and springy. Prescribed hunting behavior: Searching for prey, a Bakhmull walks or jog-trots. After seeing the game, it immediately starts galloping fast with a whole-body run (a full stretch, contracting to a ball and again to a full stretch like a string with a flexure on the waist). Bakhmull runs like a cheetah, but covering long distances, and showing jumping power, speed, and manoeuvring skill.

The Saluki is a breed of the Middle East with ancient origins (though its establishment as a standardised breed was primarily carried out in the United Kingdom and Germany) and is the most closely related to the Afghan Hound out of modern and internationally accepted breeds. The Sloughi, with a name of the same derivation, is primarily of North African stock and is a separate breed.

Major health issues are allergies, cancer, and hip dysplasia (hip dysplasia isn't typical of bakhmulls). Sensitivity to anesthesia is an issue the Afghan hound shares with the rest of the sighthound group, as sighthounds have relatively low levels of body fat. Afghan hounds are also among the dog breeds most likely to develop chylothorax, a rare condition which causes the thoracic ducts to leak, allowing large quantities of chyle fluid to enter the dog's chest cavity. This condition commonly results in a lung-lobe torsion (in which the dog's lung twists within the chest cavity, requiring emergency surgery), due to the breed's typically deep, "barrel"-shaped chest. If not corrected through surgery, chylothorax can ultimately cause fibrosing pleuritis, or a hardening of the organs, due to scar tissue forming around the organs to protect them from the chyle fluid. Chylothorax is not necessarily, but often, fatal.