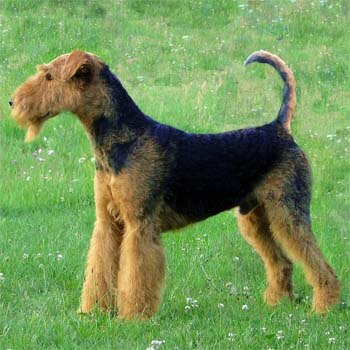 The Airedale Terrier (often shortened to "Airedale"), also called Bingley Terrier and Waterside Terrier, is a dog breed of the terrier type that originated in the valley (dale) of the River Aire, in the West Riding of Yorkshire, England. It is traditionally called the "King of Terriers" because it is the largest of the terrier breeds. The Airedale was bred from the Old English Black and Tan Terrier (now known as the Welsh Terrier), the Otterhound and probably some other Terrier breeds, and has contributed to other dog breeds, such as the Yorkshire Terrier. Originally bred to serve as a versatile hunting and all around working farm dog, in Britain this breed has also been used as a war dog, guide dog and police dog. In the United States, this breed has been used to hunt big game, upland birds, and water fowl, and serve in many other working capacities.

The Airedale is the largest of the British terriers. They weigh 19–25 kilograms (42–55 lb) in fit condition and have a height at the withers of 58–61 centimetres (23–24 in) for males, with females slightly smaller. The American Kennel Club standard specifies a very slightly smaller dog. Larger Airedales, up to 55 kilograms (121 lb) can sometimes be found in North America. They are sometimes referred to as "Oorangs" as this was the name of a kennel in Ohio in the early 1900s that produced this much larger variation, or Roosevelt Terriers.

The Airedale has a medium-length black and tan coat with a harsh topcoat and a soft undercoat. They are an alert and energetic breed, "not aggressive but fearless." It has been claimed that the larger "Oorang" type Airedales are more eager than the smaller, breed standard Airedales, but this is not necessarily so. The large type have been used for big game hunting and as family guardians or as pets, but usually do poorly in AKC (American Kennel Club) conformation shows. This larger type is also significantly more prone to hip dysplasia than the standard Airedales.

Like many terriers, the breed has a 'broken' coat, which is hard and wiry. It is meant to be kept not so long as to appear ragged, and lies straight and close, covering body and legs. The outer coat is hard, wiry and stiff, the undercoat softer. The hardest coats are crinkly or just slightly waved. Curly soft coats are highly undesirable.

The coat is hypoallergenic, tending not to generate allergic reactions in people.

Airedales bearing undercoats are generally groomed by hand stripping where a small serrated edged knife is used to pull out loose hair from the dog's coat. Most Airedales require frequent (6 to 8 weeks) clipping or stripping as they do not shed.

The AKC breed standard states that the correct coat color is either a black saddle, with a tan head, ears and legs; or a dark grizzle saddle (black mixed with gray and white). Grizzle that is a mix of red hair in the black, often on the area of back before the tail are often the best and harshest coats. There are, however, examples of non-standard black-coated and "red" (tan) coated Airedales, (the solid colored Airedales are NOT able to be AKC registered, since they are deviations from breed standard and have yet to be proven 'purebred' Airedale Terriers.) There are also the short coated "Redline" type Airedales, they appear to be genetic throwbacks in looks to the Airedale's early days when the breed's coats were much shorter than today's Airedale. Even with their shorter coat they still have the same hard wiry outer coat with a soft under coat and fall well within the criteria of the breed standard and therefore can be AKC registered and most are registered.

Traditionally the fluffy tail is long and erect. In most European countries and Australia it is illegal to dock dogs' tails unless it is for the dog's benefit (e.g., if the tail is broken). This has resulted in the emergence of a spitz tail in some dogs. Selective breeding should see this change over time and the required slightly curled tail set high on the back again become common.

In other parts of the world the Airedale's tail is commonly docked within five days of birth, but this is not considered a breed standard custom. To show an Airedale in the United States, the official AKC standard states "The root of the tail should be set well up on the back. It should be carried gaily but not curled over the back. It should be of good strength and substance and of fair length."

Airedales weigh approximately 50-80 pounds, being active and agile enough to perform well, while not too small to function as a physical deterrent, retriever or hunter. Some breeders have produced larger Airedale Terriers, such as the 'Oorang Airedale', developed in the 1920s.

Ex-Army captain and Airdale breeder Walter Lingo's monthly magazine "Oorang Comments" (#25, page 81), stated that "When full grown your Airedale dog will weigh from forty to fifty-five pounds and if a female will weigh slightly less. This is the standard weight, but when required, we can furnish oversized Airedales whose weight will be from sixty to one hundred pounds."

Because Lingo tried to fill orders for everyone, the Oorang strain size was never standardized. Airedales weighing from 40 to 100 pounds were produced, but for the most part they were approximately 50 pounds and 22 to 24 inches at the shoulder. In the United States, the male Airedales measure 40 to 70 pounds, with the Oorang strain typically in the 80 to 120 pound range.

The Airedale can be used as a working dog and also as a hunting dog. Airedales exhibit some herding characteristics as well, and have a propensity to chase animals. They have no problem working with cattle and livestock. However, an Airedale that is not well trained will agitate and annoy the animals. Airedales have generally long puppyhoods and tend to be more difficult to train in their youth.

The Airedale Terrier, like most terriers, has been bred to hunt independently. As a result, the dog is very intelligent, independent, strong-minded, stoic, and can sometimes be stubborn. If children and Airedales are both trained correctly, Airedales can be an excellent choice for a family dog. Airedales can do well with cats and other small animals, especially when they are raised with them. They are also very loyal to their owners.

Albert Payson Terhune wrote of the Airedale: "Among the mine-pits of the Aire, the various groups of miners each sought to develop a dog which could outfight and outhunt and outthink the other miner's dogs. Tests of the first-named virtues were made in inter-mine dog fights. Bit by bit, thus, an active, strong, heroic, compactly graceful and clever dog was evolved – the earliest true form of the Airedale.

He is swift, formidable, graceful, big of brain, an ideal chum and guard. ....To his master he is an adoring pal. To marauders he is a destructive lightning bolt."

The Airedale Terrier ranks 37th in Stanley Coren's The Intelligence of Dogs, being of above average working dog.

Airedale Terriers in UK, USA, and Canadian surveys had a median lifespan of about 11.5 years, which is similar to other breeds of their size.

Airedales can be affected by hip dysplasia. Like most terriers, they have a propensity towards dermatitis. Skin disorders may go unnoticed in Airedales, because of their hard, dense, wiry coats. Itchy skin may be manifest as acral lick dermatitis (also known as lick granuloma; caused by licking one area excessively) or acute moist dermatitis or "hot spots" (an oppressively itchy, inflamed and oozing patch of skin, made worse by intense licking and chewing). Allergies, dietary imbalances, and under/over-productive thyroid glands are the main causes of skin conditions.

An Airedale's coat was originally designed to protect the dog from its predators—the coat was designed to come out in the claws of the predator the dog was designed to hunt, leaving the dog unharmed. Because of this, some forms of skin dermatitis can respond to hand stripping the coat. Clipping the coat cuts the dead hair, leaving dead roots within the hair follicles. It is these dead roots which can cause skin irritations. However, hand stripping removes these dead roots from the skin and stimulates new growth.

Gastric dilatation volvulus, also known as bloat, affects Airedale Terriers. The stomach can twist and block the esophagus, causing a buildup of gas and leading to cardiovascular collapse and death. Signs of bloat include gastric distress (stomach pain), futile attempts at vomiting, and increased salivation. Bloat usually occurs when the dog is exercised too soon after eating. They will eat up to 4-6 cups of food at a time.

Due to the breed's stoic nature, injuries can go unnoticed for a time as the dog will not give obvious signs of pain or distress like whining. For example, the first indication of a cut on the foot might be limping or favoring that foot a few days after the actual injury, so owners should be aware of their pets usual movement to spot irregularities. Excessive licking of a spot may also indicate a problem other than the skin conditions listed above.