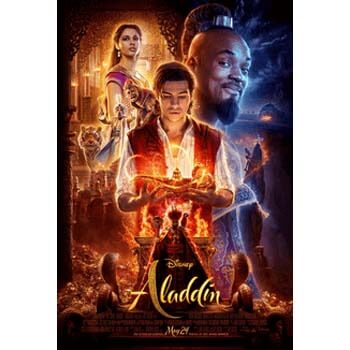 Aladdin is a 2019 American musical fantasy film produced by Walt Disney Pictures. Directed by Guy Ritchie, who co-wrote the screenplay with John August, it is a live action adaptation of Disney's 1992 animated film of the same name, which is based on the eponymous tale from One Thousand and One Nights. The film stars Will Smith, Mena Massoud, Naomi Scott, Marwan Kenzari, Navid Negahban, Nasim Pedrad, Billy Magnussen, and Numan Acar, as well as the voices of Alan Tudyk and Frank Welker. The plot follows Aladdin, a street urchin, as he falls in love with Princess Jasmine, befriends a wish-granting Genie, and battles the wicked Jafar.

In October 2016, Disney announced Ritchie would direct a live-action Aladdin remake. Smith was the first member of the cast to join, signing on to portray Genie in July 2017, and Massoud and Scott were confirmed for the two lead roles later that month. Principal photography began that September at Longcross Studios in Surrey, Great Britain, also filming in the Wadi Rum Desert in Jordan, and lasted until January 2018. Additional filming and pick-ups took place in August 2018.

Aladdin was theatrically released in the United States on May 24, 2019. It has grossed $964 million worldwide, becoming the third highest-grossing film of 2019, the 44th highest-grossing film all-time and the highest grossing film of Smith's career. The film received mixed reviews from critics, who praised the performances of Smith, Massoud and Scott, the costumes and the musical score, but criticized Ritchie's direction and the CGI effects. Critics were also divided on the deviations from the original film, particularly Kenzari's portrayal of Jafar. A sequel is in development.

Aladdin, a kind-hearted young street rat living in the Arabian city of Agrabah, along with his pet monkey Abu, rescues and befriends Princess Jasmine, who has snuck out of the palace to explore, tired of her sheltered life. Meanwhile, the Grand vizier Jafar schemes to overthrow Jasmine's father as the Sultan. He, along with his pet parrot and spy, Iago, seeks a magic lamp hidden in the Cave of Wonders that will grant his wishes. Only one person is worthy to enter: "the diamond in the rough", whom he decides is Aladdin. Aladdin is captured and Jafar persuades him to retrieve the lamp. Inside the cave, Aladdin finds a magic carpet and obtains the lamp. He gives it to Jafar, who betrays him and throws him back into the cave, though Abu steals the lamp back.

Trapped in the cave, Aladdin rubs the lamp, unwittingly summoning Genie, a powerful omnipotent being who lives inside it. Genie explains that he has the power to grant Aladdin three wishes. Aladdin tricks Genie into freeing them from the cave without using a wish. After they get out of the cave, Aladdin uses his first official wish to become a prince to impress Jasmine, and promises to use his third wish to free the Genie from servitude.

Aladdin enters Agrabah as "Prince Ali of Ababwa", arriving in an extravagant spectacle (including Abu, who has been transformed into an elephant by Genie) but Jasmine is unimpressed by his first presentation, including an assortment of gifts and jams. The two later bond when he takes her on a ride on the magic carpet to show her the world she wants to see while Genie goes out with Jasmine's handmaiden Dalia. When Jasmine deduces Aladdin's true identity, he convinces her that he is actually a prince and only dressed like a peasant to meet the citizens of Agrabah beforehand. Jafar discovers Aladdin's identity by threatening him to reveal where the lamp was and throws him into the sea but Genie rescues him at the cost of his second wish. They then expose Jafar, who is arrested and imprisoned in the dungeons. After the Sultan offers Aladdin the position as heir, Aladdin, fearing he will lose Jasmine if the truth is revealed, says he needs Genie with him now and refuses to free him. Genie tells Aladdin that he is not being true to himself.

Iago snatches one of the guardsmen’s keys and he frees Jafar. Jafar then sneakily steals the lamp from Aladdin and becomes Genie's new master. He uses his first two wishes to become Sultan and then to become the world's most powerful sorcerer, trapping the guards and Jasmine's pet tiger Rajah. He then exposes Aladdin's truth to Jasmine and exiles him and Abu to a frozen wasteland. He threatens to kill Jasmine's father and Dalia unless she agrees to marry him. At the wedding ceremony, Aladdin and Abu return, having been rescued by the magic carpet and Jasmine steals back the lamp. Furious, Jafar transforms Iago into a roc to give chase and overpowers them.

Aladdin stalls by taunting Jafar for being second only to Genie in terms of raw power, thereby tricking him into using his last wish to become the most powerful being in the universe. Due to the grey area in that wish, Genie is free to interpret it as he wishes and turns Jafar into a jinn himself. Being chained to the lamp without a master, Jafar gets trapped inside, dragging Iago inside with him. Genie throws Jafar's lamp to the Cave of Wonders and Aladdin keeps his promise, using his last wish to free Genie and turn him human. The Sultan declares that Jasmine will be the next ruler and tells her that Aladdin is a good person, and Jasmine reunites with him. Genie marries Dalia and leaves to explore the world and start a family with her. Aladdin and Jasmine get married and start a new life.