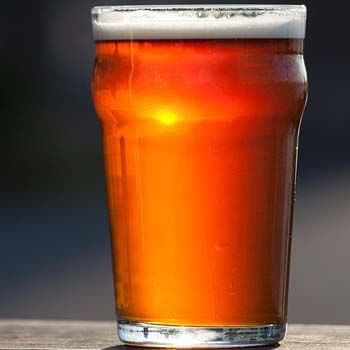 Ale is a type of beer brewed using a warm fermentation method, resulting in a sweet, full-bodied and fruity taste. Historically, the term referred to a drink brewed without hops.

As with most beers, ale typically has a bittering agent to balance the malt and act as a preservative. Ale was originally bittered with gruit, a mixture of herbs or spices boiled in the wort before fermentation. Later, hops replaced gruit as the bittering agent.

Ale is typically fermented at temperatures between 15 and 24 °C (60 and 75 °F). At temperatures above 24 °C (75 °F) the yeast can produce significant amounts of esters and other secondary flavour and aroma products, and the result is often a beer with slightly "fruity" compounds resembling those found in fruits, such as apple, pear, pineapple, banana, plum, cherry, or prune.

Brown ales tend to be lightly hopped, and fairly mildly flavoured, often with a nutty taste. In the south of England they are dark brown, around 3-3.6% alcohol, and quite sweet and palatable; in the north they are red-brown, 4.5-5% and somewhat drier. English brown ales first appeared in the early 1900s, with Manns Brown Ale and Newcastle Brown Ale as the best-known examples. The style became popular with homebrewers in North America in the early 1980s; Pete's Wicked Ale is an example, similar to the English original, but substantially hoppier.

Pale ale was a term used for beers made from malt dried with coke. Coke had been first used for roasting malt in 1642, but it wasn't until around 1703 that the term pale ale was first used. By 1784 advertisements were appearing in the Calcutta Gazette for "light and excellent" pale ale. By 1830 onward the expressions bitter and pale ale were synonymous. Breweries would tend to designate beers as pale ale, though customers would commonly refer to the same beers as bitter. It is thought that customers used the term bitter to differentiate these pale ales from other less noticeably hopped beers such as porter and mild. By the mid to late 20th century, while brewers were still labelling bottled beers as pale ale, they had begun identifying cask beers as bitter, except those from Burton on Trent, which are often called pale ales regardless of the method of dispatch.

In the nineteenth century, the Bow Brewery in England exported beer to India, including a pale ale that benefited from the duration of the voyage and was highly regarded among consumers in India. To avoid spoilage, Bow and other brewers added extra hops as a natural preservative. This beer was the first of a style of export ale that became known as India Pale Ale or IPA.

Developed in hope of winning the younger people away from drinking lager in favour of cask ales, it is quite similar to pale ale yet there are some notable differences—it is paler, brewed with lager or low temperature ale malts and it is served at colder temperatures. The strength of golden ales varies from 3.5% to 5.3%.

While the full range of ales are produced in Scotland, the term Scotch ale is used internationally to denote a malty, strong ale, amber-to-dark red in colour. The malt may be slightly caramelised to impart toffee notes; generally, Scottish beers tend to be sweeter, darker, and less hoppy than English beers. The classic styles are Light, Heavy and Export, also referred to as 60/-, 70/- and 80/- (shillings) respectively, dating back to the 19th-century method of invoicing beers according to their strength.

Barley wines range from 6% to 12%, with some stored for long periods of time, about 18 to 24 months. While drinking barley wine, one should be prepared to taste "massive sweet malt and ripe fruit of the pear drop, orange and lemon type, with darker fruits, chocolate and coffee if darker malts are used. Hop rates are generous and produce bitterness and peppery, grassy and floral notes".

Mild ale originally meant unaged ale, the opposite of old ale. It can be any strength or colour, although most are dark brown and low in strength, typically between 3 and 3.5%. An example of a lighter coloured mild is Banks's Mild.

Burton ale is a strong, dark, somewhat sweet ale, sometimes used as stock ale for blending with younger beers. Bass No.1 was a classic example of Burton ale. Some consider Fullers 1845 Celebration Ale a rare modern example of a Burton ale.

In England, old ale was strong beer traditionally kept for about a year, gaining sharp, acidic flavours as it did so. The term is now applied to medium-strong dark beers, some of which are treated to resemble the traditional old ales. In Australia, the term is used even less discriminately, and is a general name for any dark beer.

Belgium produces a wide variety of speciality ales that elude easy classification. Virtually all Belgian ales are high in alcoholic content but relatively light in body due to the substitution of sucrose for part of the grist, which provides an alcohol boost without adding unfermentable material to the finished product. This process is often said to make a beer more digestible.

Cask ale is unfiltered and unpasteurised beer which is conditioned (including secondary fermentation) and served from a cask without additional nitrogen or carbon dioxide pressure. Cask ale is also sometimes referred to as real ale in the United Kingdom.