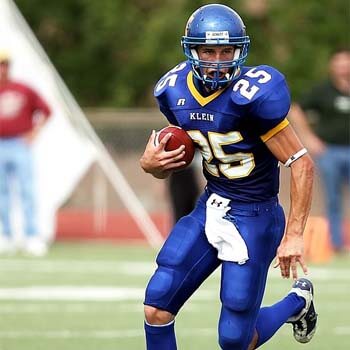 All-purpose yards or all-purpose yardage is an American football and Canadian football statistical measure. It is virtually the same as the statistic that some football leagues refer to as combined net yards. In the game of football, progress is measured by advancing the football towards the opposing team's goal line. Progress can be made during play by the offensive team by advancing the ball from its point of progress at the start of play known as the line of scrimmage or by the defensive team after taking possession of the football via a change of possession (such as punt, kickoff, interception, punt block, blocked kick or fumble). When the offensive team advances the ball by rushing the football, the player who carries the ball is given credit for the difference in progress measured in rushing yards. When the offensive team advances the ball by pass reception, the player who catches the reception is given credit for the difference in progress measured in reception yards. Although the ball may also be advanced by penalty, these yards are not considered all-purpose yards. Progress lost via quarterback sacks is classified variously. Thus, all-purpose yards is a combined total of rushing yards, receiving yards, and all forms of return yards only. Some sources do not specify which types of return yards count toward this total because the most common forms of return yards are kick and punt return yards.