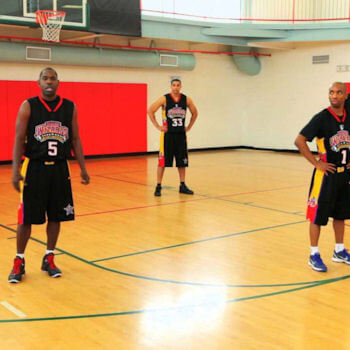 The amoeba defense is a defensive strategy in the game of basketball.

The amoeba defense is a basketball defense used to wear down an offense. It is a risky defense that mixes the man-to-man and zone defenses together. The defense is set up like a diamond. The two quickest players, usually the point and shooting guards, should be set at the top of the key and just above the free throw line, while your biggest defender, most commonly the center or power forward, is set up under the basket and your other two defenders are set up on opposite sides of the lane just below the elbows.

Defending a two-guard front: A two-guard front is a different offensive formation in which two players begin at the top of the key, one player plays the high post and the other two players are positioned just above the baseline outside the three-point line. When defending against a two guard front in the amoeba defense the formation changes from a diamond shape to a 2-1-2 defense. The top two defenders who we first stacked at the free throw line and top of the key come up to defend the two guards. The defender under the basket then comes up to the free throw line and guards behind the high post. While the defenders on either side of the lane stay put to guard the pass to the corner. Ideally the ball handler would pass the ball to the high post. In that situation both defenders up top both drop down to the free throw line to triple team the high post. The high post would, in the perfect situation, panic and make a bad pass. The two defenders down low should then anticipate the pass and intercept it.

The amoeba defense is a gambling defense; if used correctly it can lead to many fast breaks and easy layups, although if beaten the defense almost always leads to an uncontested layup or open shot. When used in cooperation with the man-to-man defense it can disrupt any offense and lead to many scoring streaks. Since the defense was developed, many high school and college teams such as Rutgers and Pittsburgh have been very successful when using the defense in combination with other defenses. The defense is seen more in younger play because professional athletes are much faster and much better shooters. The amoeba defense is a gambling defense so there may be cases in which the other team may be given easy opportunities to score. When anticipating a pass a defender may miss an interception in some cases leaving the defender wide open for a shot. In the case that a triple team occurs, if a pass is made an offensive player may be left wide open for a shot if the defender does not close out quickly enough. The defense packs into the middle of the lane so when playing a better shooting team it may be a smarter choice to stick to a man-to-man or zone defense.