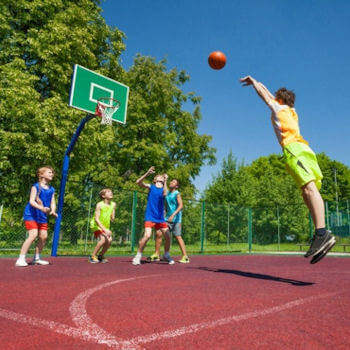 Around the World (sometimes called Around the Key) is a basketball variant played by two or more players, who have all agreed upon a turn order. The game requires a sequence of shooting positions to be decided upon. The object is to be the first player to make a shot from all positions. when a player makes a successful shot from the final position, the game enters the final stage. Some play such that this player is declared the winner. Others play such that those players who have yet to act on the turn get a chance to tie, which cancels any advantage of going first.

In theory, the shooting positions are arbitrary; in practice, they are most commonly ordered along the 3-point line in equal intervals starting from one of the sides of the basket and including the straight-on center shot (e.g., 0, 30, 60, 90, 120, 150, and 180 degrees along the 3-point line with 90 being the center). This 180-degree semi-circular path is the inspiration for the game's name. Other common positions are around the key or even under the basket.

Making a shot from a position allows a player to advance to the next position. The rules are very flexible but usually a player keeps advancing until a missed shot. The consequences of missing a shot may vary. Sometimes the game is played such that a missed shot requires the player to start over at the first position. Under this rule, the game may also include another rule that allows a player to "save" their position, and pass the ball to the next player. It is probably most common, however, to play such that each player continues until a missed shot. At this point a player may save his position or elect to take another "chance" shot. If the chance shot is made, the player advances as normal. If it misses, the player's turn ends and they suffer some penalty, perhaps regressing a position or even starting over.

There are a multitude of ways the game can be modified. Other variations include: shooting with the off arm, shooting with alternating arms, or using the backboard on every shot (except those directly to the side of the basket).

This game can also be played alone as shooting training.