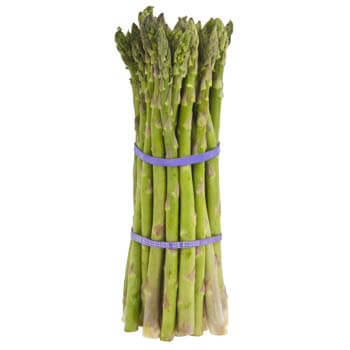 It was once classified in the lily family, like the related Allium species, onions and garlic. However, genetic research places lilies, Allium, and asparagus in three separate families—the Liliaceae, Amaryllidaceae, and Asparagaceae, respectively—with the Amaryllidaceae and Asparagaceae being grouped together in the order Asparagales. Sources differ as to the native range of Asparagus officinalis, but generally include most of Europe and western temperate Asia. It is widely cultivated as a vegetable crop.

Asparagus is a herbaceous, perennial plant growing to 100–150 cm (39–59 in) tall, with stout stems with much-branched, feathery foliage. The "leaves" are in fact needle-like cladodes (modified stems) in the axils of scale leaves; they are 6–32 mm (0.24–1.26 in) long and 1 mm (0.039 in) broad, and clustered four to 15 together, in a rose-like shape. The root system is adventitious and the root type is fasciculated. The flowers are bell-shaped, greenish-white to yellowish, 4.5–6.5 mm (0.18–0.26 in) long, with six tepals partially fused together at the base; they are produced singly or in clusters of two or three in the junctions of the branchlets. It is usually dioecious, with male and female flowers on separate plants, but sometimes hermaphrodite flowers are found. The fruit is a small red berry 6–10 mm diameter, which is poisonous to humans.

Plants native to the western coasts of Europe (from northern Spain north to Ireland, Great Britain, and northwest Germany) are treated as Asparagus officinalis subsp. prostratus (Dumort.) Corb., distinguished by its low-growing, often prostrate stems growing to only 30–70 cm (12–28 in) high, and shorter cladodes 2–18 mm (0.079–0.709 in) long. It is treated as a distinct species, Asparagus prostratus Dumort, by some authors.

Only young asparagus shoots are commonly eaten: once the buds start to open ("ferning out"), the shoots quickly turn woody.

Water makes up 93% of asparagus's composition. Asparagus is low in calories and is very low in sodium. It is a good source of vitamin B6, calcium, magnesium, and zinc, and a very good source of dietary fibre, protein, beta-carotene, vitamin C, vitamin E, vitamin K, thiamin, riboflavin, rutin, niacin, folic acid, iron, phosphorus, potassium, copper, manganese, and selenium, as well as chromium, a trace mineral that regulates the ability of insulin to transport glucose from the bloodstream into cells. The amino acid asparagine gets its name from asparagus, as the asparagus plant is relatively rich in this compound.

The shoots are prepared and served in a number of ways around the world, typically as an appetizer or vegetable side dish. In Asian-style cooking, asparagus is often stir-fried. Cantonese restaurants in the United States often serve asparagus stir-fried with chicken, shrimp, or beef. It may also be quickly grilled over charcoal or hardwood embers, and is also used as an ingredient in some stews and soups. In recent years, asparagus eaten raw, as a component of a salad, has regained popularity.

Asparagus can also be pickled and stored for several years. Some brands label shoots prepared in this way as "marinated".

Stem thickness indicates the age of the plant, with the thicker stems coming from older plants. Older, thicker stalks can be woody, although peeling the skin at the base removes the tough layer. Peeled asparagus will poach much faster. The bottom portion of asparagus often contains sand and soil, so thorough cleaning is generally advised before cooking.

Green asparagus is eaten worldwide, though the availability of imports throughout the year has made it less of a delicacy than it once was. In Europe, however, the "asparagus season is a highlight of the foodie calendar"; in the UK this traditionally begins on 23 April and ends on Midsummer Day. As in continental Europe, due to the short growing season and demand for local produce, asparagus commands a premium price.

Only seasonally on the menu, asparagus dishes are advertised outside many restaurants, usually from late April to June. For the French style, asparagus is often boiled or steamed and served with Hollandaise sauce, melted butter or olive oil, Parmesan cheese, or mayonnaise. Tall, narrow asparagus cooking pots allow the shoots to be steamed gently, their tips staying out of the water.

During the German Spargelsaison or Spargelzeit ("asparagus season" or "asparagus time"), the asparagus season that traditionally finishes on 24 June, roadside stands and open-air markets sell about half of the country's white asparagus consumption.

Since asparagus often originates in maritime habitats, it thrives in soils that are too saline for normal weeds to grow. Thus, a little salt was traditionally used to suppress weeds in beds intended for asparagus; this has the disadvantage that the soil cannot be used for anything else. Some places are better for growing asparagus than others. The fertility of the soil is a large factor. "Crowns" are planted in winter, and the first shoots appear in spring; the first pickings or "thinnings" are known as sprue asparagus. Sprue has thin stems.

A breed of "early season asparagus" that can be harvested two months earlier than usual was announced by a UK grower in early 2011. This variety does not need to lie dormant and blooms at 7 °C (45 °F) rather than the usual 9 °C (48 °F).

Purple asparagus differs from its green and white counterparts in having high sugar and low fibre levels. Purple asparagus was originally developed in Italy, near the city of Albenga and commercialized under the variety name 'Violetto d' Albenga'. Since then, breeding work has continued in the United States and New Zealand, creating the 'Pacific Purple' variety.

Asparagus is said to be a useful companion plant for tomatoes, as the tomato plant repels the asparagus beetle. Asparagus may repel some harmful root nematodes that affect tomato plants.

China is by far the world's largest producer: in 2017 it produced 7,845,162 tonnes, followed by Peru with 383,098 tonnes and Mexico with 245,681 tonnes. U.S. production was concentrated in California, Michigan, and Washington. The annual production for white asparagus in Germany is 57,000 tonnes (61% of consumer demand).

When grown under tunnels, growers can extend the harvest season. In the UK, it is estimated that the asparagus harvest season can begin as early as mid-February and continue into late autumn by growing cold-resistant cultivars under heated polytunnels. Furthermore, late season harvests can be achieved using 'reverse season growth' where spears are left to fern between March–August and harvested in September–October.

In Asia, an alternative approach to cultivating asparagus has been employed and is referred to as 'Mother Stalk Method' where three to five stalks per plant are allowed to develop into fern, while harvesting adjacent spears.