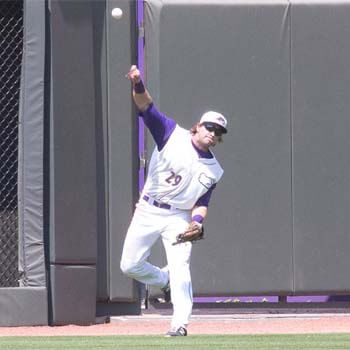 In baseball, an assist (denoted by A) is a defensive statistic, baseball being one of the few sports in which the defensive team controls the ball. An assist is credited to every defensive player who fields or touches the ball (after it has been hit by the batter) prior to the recording of a putout, even if the contact was unintentional. For example, if a ball strikes a player's leg and bounces off him to another fielder, who tags the baserunner, the first player is credited with an assist. A fielder can receive a maximum of one assist per out recorded. An assist is also credited if a putout would have occurred, had another fielder not committed an error. For example, a shortstop might field a ground ball cleanly, but the first baseman might drop his throw. In this case, an error would be charged to the first baseman, and the shortstop would be credited with an assist.

Assists are an important statistic for outfielders, as a play often occurs when a baserunner on the opposing team attempts to advance on the basepaths when the ball is hit to the outfield (even on a caught fly ball that results in an out; see tag up). It is the outfielder's job to field the ball and make an accurate throw to another fielder who is covering the base before the runner reaches it. The fielder then attempts to tag the runner out. This is especially important if the runner was trying to reach home plate, as the assist and tag prevent the baserunner from scoring a run. Assists are much rarer for outfielders than infielders (with the exception of first basemen) because the play is harder to make, and also because outfielder assist situations occur less often than the traditional ground-ball assist for a shortstop, second baseman, or third baseman. However, as a result, outfield assists are worth far more than infield assists, and tell more about an outfielder's throwing arm than infielder assists do.