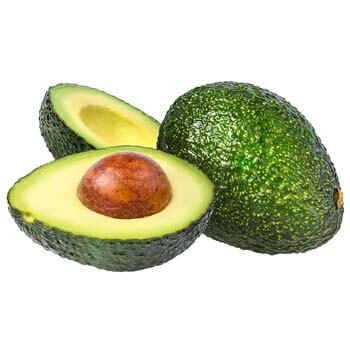 The avocado (Persea americana), a tree with probable origin in South Central Mexico, is classified as a member of the flowering plant family Lauraceae. The fruit of the plant, also called an avocado (or avocado pear or alligator pear), is botanically a large berry containing a single large seed.

Avocados are commercially valuable and are cultivated in tropical and Mediterranean climates throughout the world. They have a green-skinned, fleshy body that may be pear-shaped, egg-shaped, or spherical. Commercially, they ripen after harvesting. Avocado trees are partially self-pollinating, and are often propagated through grafting to maintain predictable fruit quality and quantity. In 2017, Mexico produced 34% of the world supply of avocados.

The subtropical species needs a climate without frost and with little wind. High winds reduce the humidity, dehydrate the flowers, and affect pollination. When even a mild frost occurs, premature fruit drop may occur, although the 'Hass' cultivar can tolerate temperatures down to −1 °C. Several cold-hardy varieties are planted in the region of Gainesville, Florida, which survive temperatures as low as −6.5 °C (20 °F) with only minor leaf damage. The trees also need well-aerated soils, ideally more than 1 m deep. Yield is reduced when the irrigation water is highly saline. These soil and climate conditions are available in southern and eastern Colombia, Morocco, the Levant, South Africa, Venezuela, Spain, Peru, parts of central and northern Chile, Vietnam, Indonesia, parts of southern India, Sri Lanka, Australia, New Zealand, the Philippines, Malaysia, Central America, the Caribbean, Mexico, southern California, Arizona, Puerto Rico, Texas, Florida, Hawaii, Ecuador, and Rwanda. Each region has different cultivars.

In 2017, world production of avocados was 5.9 million tonnes, led by Mexico with 34% (2.01 million tonnes) of the total. Other major producers were Dominican Republic, Peru, Indonesia, and Colombia, together producing 30% of the world total. In 2018, the US Department of Agriculture estimated that 231,028 hectares (570,880 acres) in total were under cultivation for avocado production in Mexico, a 6% increase over the previous year, and that 2 million tonnes would be exported. The Mexican state of Michoacán is the world leader in avocado production, accounting for 80% of all Mexican output. Most Mexican growers produce the Hass variety due to its high demand worldwide and longer shelf life.

The fruit of horticultural cultivars has a markedly higher fat content than most other fruit, mostly monounsaturated fat, and as such serves as an important staple in the diet of consumers who have limited access to other fatty foods (high-fat meats and fish, dairy products). Having a high smoke point, avocado oil is expensive compared to common salad and cooking oils, and mostly used for salads or dips.

A ripe avocado yields to gentle pressure when held in the palm of the hand and squeezed. The flesh is prone to enzymatic browning, quickly turning brown after exposure to air. To prevent this, lime or lemon juice can be added to avocados after peeling.

The fruit is not sweet, but distinctly and subtly flavored, with smooth texture. It is used in both savory and sweet dishes, though in many countries not for both. The avocado is common in vegetarian cuisine as a substitute for meats in sandwiches and salads because of its high fat content.

Generally, avocado is served raw, though some cultivars, including the common 'Hass', can be cooked for a short time without becoming bitter. The flesh of some avocados may be rendered inedible by heat. Prolonged cooking induces this chemical reaction in all cultivars.

It is used as the base for the Mexican dip known as guacamole, as well as a spread on corn tortillas or toast, served with spices.

In the Philippines, Brazil, Indonesia, Vietnam, and southern India (especially the coastal Kerala, Tamil Nadu and Karnataka region), avocados are frequently used for milkshakes and occasionally added to ice cream and other desserts. In Brazil, Vietnam, the Philippines and Indonesia, a dessert drink is made with sugar, milk or water, and pureed avocado. Chocolate syrup is sometimes added. In Morocco, a similar chilled avocado and milk drink is sweetened with confectioner's sugar and flavored with a touch of orange flower water.

In Ethiopia, avocados are made into juice by mixing them with sugar and milk or water, usually served with Vimto and a slice of lemon. It is also common to serve layered multiple fruit juices in a glass (locally called Spris) made of avocados, mangoes, bananas, guavas, and papayas. Avocados are also used to make salads.

Avocados in savory dishes, often seen as exotic, are a relative novelty in Portuguese-speaking countries, such as Brazil, where the traditional preparation is mashed with sugar and lime, and eaten as a dessert or snack. This contrasts with Spanish-speaking countries such as Chile, Mexico, or Argentina, where the opposite is true and sweet preparations are rare.

In Australia and New Zealand, avocados are commonly served on sandwiches, sushi, toast, or with chicken. In Ghana, they are often eaten alone on sliced bread as a sandwich. In Sri Lanka, their well-ripened flesh, thoroughly mashed or pureed with milk and kitul treacle (a liquid jaggery made from the sap of the inflorescence of jaggery palms), is a common dessert. In Haiti, they are often consumed with cassava or regular bread for breakfast.

In Mexico and Central America, avocados are served mixed with white rice, in soups, salads, or on the side of chicken and meat. In Peru, they are consumed with tequeños as mayonnaise, served as a side dish with parrillas, used in salads and sandwiches, or as a whole dish when filled with tuna, shrimp, or chicken. In Chile, it is used as a puree-like sauce with chicken, hamburgers, and hot dogs; and in slices for celery or lettuce salads. The Chilean version of Caesar salad contains large slices of mature avocado. In Kenya and Nigeria, the avocado is often eaten as a fruit alone or mixed with other fruits in a fruit salad, or as part of a vegetable salad.

Avocado is a primary ingredient in avocado soup. Avocado slices are frequently added to hamburgers, tortas, hot dogs, and carne asada. Avocado can be combined with eggs (in scrambled eggs, tortillas, or omelettes), and is a key ingredient in California rolls and other makizushi ("maki", or rolled sushi).

In the United Kingdom, the avocado became available during the 1960s when introduced by Sainsbury's under the name 'avocado pear'.

A typical serving of avocado (100 g) is moderate to rich in several B vitamins and vitamin K, with good content of vitamin C, vitamin E and potassium (right table, USDA nutrient data). Avocados also contain phytosterols and carotenoids, such as lutein and zeaxanthin.

Avocados have diverse fats. For a typical avocado: