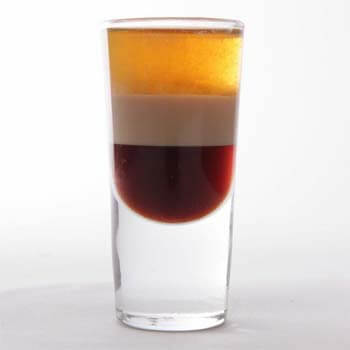 The B-52 (also B52 or Bifi or Bifty) cocktail is a layered shot composed of a coffee liqueur (Kahlúa), an Irish cream (Baileys Irish Cream), and a Grand Marnier (in later versions replaced with triple sec or Cointreau). When prepared properly, the ingredients separate into three distinctly visible layers (due to their relative densities).

There are special machines that can prepare a B-52 (or other multi-layered cocktails) in only a few seconds. However, an experienced bartender usually relies on the traditional, hand-made preparation. This method of the preparation is called "building", as opposed to blending or shaking, thus, B-52s are "built."

B-52s are usually served in a shot glass or sherry glass, although a heatproof glass is required when a "flaming B-52" is served. First, a coffee liqueur, such as Tia Maria or Kahlúa, is poured into the glass. Next, Baileys Irish Cream is poured very slowly over the back of a cold bar spoon, taking care to avoid disturbing the lower layer as the second liquor is poured on top. Just as carefully, Grand Marnier is poured atop the Irish Cream using the bar spoon.

The drink is sometimes made with a shaker and served in a cocktail glass, although this is less traditional.

For a Flaming B-52, the top layer is ignited, producing a blue flame. Filling the glass to the top reduces the amount of glass exposed to the flames, making the glass less likely to break, but the drink is easier to spill. It is best to leave the flaming B-52 on the bartop and drink it through a straw. Once lit, the drink should be finished quickly to avoid overheating the glass and burning the straw. Unless the flame is extinguished before drinking, a fireproof straw—such as one made of metal—may be preferred. Safety precautions should always be used in consideration of both fire and broken glass.

Triple Sec at room temperature will not ignite easily, so it should be warmed up beforehand or topped with a small layer of an overproof rum with 65-85% ABV such as Bacardi 151 or Stroh 160. Such a preparation can be referred to as a "B-52 On a Mission".