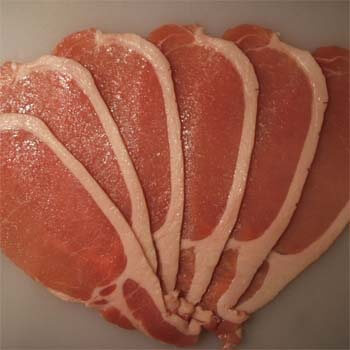 Canadian bacon or "Canadian-style bacon" is the American name for a form of back bacon that is cured, smoked and fully cooked, trimmed into cylindrical medallions, and thickly sliced. "Canadian" bacon is made only from the lean eye of the loin and is ready to eat. Its flavor is described as more ham-like than other types because of its lean cut.

The term "Canadian bacon" is not actually used in Canada, where the product is generally known simply as "back bacon" while "bacon" alone refers to the same streaky pork belly bacon as in the United States. Peameal bacon is a variety of back bacon popular in southern Ontario where the loin is wet cured before being rolled in cornmeal (originally yellow pea meal); it is unsmoked.