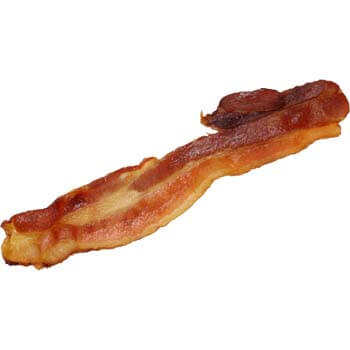 Bacon is a type of salt-cured pork. Bacon is prepared from several different cuts of meat, typically from the pork belly or from back cuts, which have less fat than the belly. It is eaten on its own, as a side dish (particularly in breakfasts), or used as a minor ingredient to flavour dishes (e.g., the club sandwich). Bacon is also used for barding and larding roasts, especially game, including venison and pheasant. The word is derived from the Old High German bacho, meaning "buttock", "ham" or "side of bacon", and is cognate with the Old French bacon.

Meat from other animals, such as beef, lamb, chicken, goat, or turkey, may also be cut, cured, or otherwise prepared to resemble bacon, and may even be referred to as, for example, "turkey bacon". Such use is common in areas with significant Jewish and Muslim populations as both religions prohibit the consumption of pork. Vegetarian bacons such as "soy bacon" also exist and attract vegetarians and vegans.

Bacon is cured through either a process of injecting with or soaking in brine, known as wet curing, or using plain crystal salt, known as dry curing. Bacon brine has added curing ingredients, most notably sodium nitrite (or less often, potassium nitrate), which speed the curing and stabilize color. Fresh bacon may then be dried for weeks or months in cold air, or it may be smoked or boiled. Fresh and dried bacon are typically cooked before eating, often by pan frying. Boiled bacon is ready to eat, as is some smoked bacon, but they may be cooked further before eating. Differing flavours can be achieved by using various types of wood, or less common fuels such as corn cobs or peat. This process can take up to eighteen hours, depending on the intensity of the flavour desired. The Virginia Housewife (1824), thought to be one of the earliest American cookbooks, gives no indication that bacon is ever not smoked, though it gives no advice on flavouring, noting only that care should be taken lest the fire get too hot. In early American history, the curing and smoking of bacon (like the making of sausage) seems to have been one of the few food-preparation processes not divided by gender.

Bacon is distinguished from other salt-cured pork by differences in the cuts of meat used and in the brine or dry packing. Historically, the terms "ham" and "bacon" referred to different cuts of meat that were brined or packed identically, often together in the same barrel. Today, ham is defined as coming from the hind portion of the pig and brine specifically for curing ham includes a greater amount of sugar, while bacon is less sweet, though ingredients such as brown sugar or maple syrup are used for flavor. Bacon is similar to salt pork, which in modern times is often prepared from similar cuts, but salt pork is never smoked, and has a much higher salt content.

For safety, bacon may be treated to prevent trichinosis, caused by Trichinella, a parasitic roundworm which can be destroyed by heating, freezing, drying, or smoking. Sodium polyphosphates, such as sodium triphosphate, may also be added to make the product easier to slice and to reduce spattering when the bacon is pan-fried.

Varieties differ depending on the primal cut from which they are prepared. Different cuts of pork are used for making bacon depending on local preferences.

The inclusion of skin with a cut of bacon, known as the 'bacon rind', varies, though is less common in the English-speaking world.

Bacon is often served with eggs and sausages as part of a full breakfast.

The most common form sold is middle bacon, which includes some of the streaky, fatty section of side bacon along with a portion of the loin of back bacon. In response to increasing consumer diet-consciousness, some supermarkets also offer the loin section only. This is sold as short cut bacon and is usually priced slightly higher than middle bacon. Both varieties are usually available with the rind removed.

In Canada, the term bacon on its own typically refers to side bacon. Canadian-style back bacon is a lean cut from the eye of the pork loin with little surrounding fat. Peameal bacon is an unsmoked back bacon, wet-cured and coated in fine-ground cornmeal (historically, it was rolled in ground, dried peas); it is popular in southern Ontario. Bacon is often eaten in breakfasts, such as with cooked eggs or pancakes. Maple syrup is often used as a flavouring while curing bacon in Canada.

Some of the meanings of bacon overlap with the German-language term Speck. Germans use the term bacon explicitly for Frühstücksspeck ('breakfast Speck') which are cured or smoked pork slices. Traditional German cold cuts favor ham over bacon, however "Wammerl" (grilled pork belly) remains popular in Bavaria.

Small bacon cubes (called "Grieben" or "Grammerln" in Austria and southern Germany) have been a rather important ingredient of various southern German dishes. They are used for adding flavor to soups and salads and for speck dumplings and various noodle and potato dishes. Instead of preparing them at home from larger slices, they have been sold ready made as convenience foods recently as "Baconwürfel" ("bacon cubes") in German retail stores.

In Japan, bacon (ベーコン) is pronounced "bēkon". It is cured and smoked belly meat as in the US, and is sold in either regular or half-length sizes. Bacon in Japan is different from that in the US in that the meat is not sold raw, but is processed, precooked and has a ham-like consistency when cooked. Uncured, sliced pork belly, known as bara (バラ), is very popular in Japan and is used in a variety of dishes (e.g. yakitori and yakiniku).

Back bacon is the most common form in the UK and Ireland, and is the usual meaning of the plain term "bacon". A thin slice of bacon is known as a rasher; about 70% of bacon is sold as rashers. Heavily trimmed back cuts which consist of just the eye of meat, known as a medallion, are also available. All types may be unsmoked or smoked. The side cut normal in America is known as "streaky bacon", and there is also a long cut, curving round on itself, known as "middle bacon", which is back bacon at one end, and streaky at the other, as well as less common cuts. Bacon is also sold and served as joints, usually boiled, broiled or roast, or in thicker slices called chops or steaks. These are usually eaten as part of other meals.

Bacon may be cured in several ways, and may be smoked or unsmoked; unsmoked bacon is known as "green bacon". Fried or grilled bacon rashers are included in the "traditional" full breakfast. Hot bacon sandwiches are a popular cafe dish in the UK and Ireland, and is anecdotally recommended as a hangover cure.

The term bacon on its own generally refers to side bacon, which is the most popular type of bacon sold in the US. Back bacon is known as "Canadian bacon" or "Canadian-style bacon", and is usually sold pre-cooked and thick-sliced. American bacons include varieties smoked with hickory, mesquite or applewood and flavourings such as chili pepper, maple, brown sugar, honey, or molasses. A side of unsliced bacon is known as "slab bacon".

In the US and Europe, bacon is commonly used as a condiment or topping on other foods, often in the form of bacon bits. Streaky bacon is more commonly used as a topping in the US on such items as pizza, salads, sandwiches, hamburgers, baked potatoes, hot dogs, and soups. In the US, sliced smoked back bacon is used less frequently than the streaky variety, but can sometimes be found on pizza, salads, and omelettes.

Bacon is also used in adaptations of dishes; for example, bacon wrapped meatloaf, and can be mixed in with green beans or served sautéed over spinach.

Bacon fat liquefies and becomes drippings when it is heated. Once cool, it firms into a form of lard. Bacon fat is flavourful and is used for various cooking purposes. Traditionally, bacon grease is saved in British and southern US cuisine, and used as a base for cooking and as an all-purpose flavouring, for everything from gravy to cornbread to salad dressing.

Bacon is often used for a cooking technique called barding consisting of laying or wrapping strips of bacon or other fats over a roast to provide additional fat to a lean piece of meat. It is often used for roast game birds, and is a traditional method of preparing beef filet mignon, which is wrapped in strips of bacon before cooking. The bacon itself may afterwards be discarded or served to eat, like cracklings. It may also be cut into lardons.

One teaspoon (4 g or 0.14 oz) of bacon grease has 38 calories (40 kJ/g). It is composed almost completely of fat, with very little additional nutritional value. Bacon fat is roughly 40% saturated. Despite the disputed health risks of excessive bacon grease consumption, it remains popular in the cuisine of the American South.

One 10-g slice of cooked side bacon contains 4.5 g of fat, 3.0 g of protein, and 205 mg of sodium. The fat, protein, and sodium content varies depending on the cut and cooking method.

68% of the food energy of bacon comes from fat, almost half of which is saturated. A serving of three slices of bacon contains 30 milligrams of cholesterol (0.1%).

Several alternatives to and substitutes for bacon have been developed for those who cannot or prefer not to eat standard pork bacon.

Turkey bacon is an alternative to bacon. People may choose turkey bacon over real bacon due to health benefits, religious laws, or other reasons. It is lower in fat and food energy than bacon, but may be used in a similar manner (such as in a BLT sandwich).

The meat for turkey bacon comes from the whole turkey and can be cured or uncured, smoked, chopped, and reformed into strips that resemble bacon. Turkey bacon is cooked by pan-frying. Cured turkey bacon made from dark meat can be 90% fat free. The low fat content of turkey bacon means it does not shrink while being cooked and has a tendency to stick to the pan.

Macon is another alternative to bacon, produced by curing cuts of mutton in a manner similar to the production of pork bacon. Historically produced in Scotland, it was introduced across Britain during World War II as a consequence of rationing. It is today available as an alternative to bacon, produced for the Muslim market and sold at halal butchers; it is largely similar in appearance to pork bacon except for the darker colour.

Vegetarian bacon, also referred to as facon, veggie bacon, or vacon, is a product marketed as a bacon alternative. It has no cholesterol, is low in fat, and contains large amounts of protein and fibre. Two slices contain about 310 kilojoules (74 kcal). Vegetarian bacon is usually made from marinated strips of textured soy protein or tempeh.

The popularity of bacon in the United States has given rise to a number of commercial products that promise to add bacon flavouring without the labour involved in cooking it or the perceived negative qualities of bacon.

Bacon bits are a frequently used topping on salad or potatoes, and a common element of salad bars. They are usually salted. Bacon bits are made from small, crumbled pieces of bacon; in commercial plants they are cooked in continuous microwave ovens. Similar products are made from ham or turkey, and analogues are made from textured vegetable protein, artificially flavoured to resemble bacon.