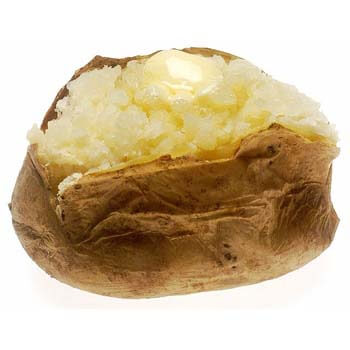 A baked potato, or jacket potato, is a potato that has been baked for eating. When well cooked, a baked potato has a fluffy interior and a crisp skin. It may be served with fillings and condiments such as butter, cheese, sour cream, gravy or even ground meat. Potatoes can be baked in a conventional gas or electric oven, a convection oven, a microwave oven, on a barbecue grill, or on/in an open fire. Some restaurants use special ovens designed specifically to cook large numbers of potatoes, then keep them warm and ready for service.

Prior to cooking, the potato should be scrubbed clean, washed and dried with eyes and surface blemishes removed, and basted with oil (usually olive oil) or butter and/or salt. Pricking the potato with a fork or knife allows steam to escape during the cooking process. Potatoes cooked in a microwave oven without pricking the skin might split open due to built up internal pressure from unvented steam. It takes between one and two hours to bake a large potato in a conventional oven at 200 °C (392 °F). Microwaving takes from six to twelve minutes depending on oven power and potato size, but does not generally produce a crisp skin. Some recipes call for use of both a microwave and a conventional oven, with the microwave being used to vent most of the steam prior to the cooking process.

Some varieties of potato such as Russet and King Edward potatoes are more suitable for baking than others, owing to their size and consistency.

Wrapping the potato in aluminium foil before cooking in a standard oven will help to retain moisture, while leaving it unwrapped will result in a crisp skin. When cooking over an open fire or in the coals of a barbecue, it may require wrapping in foil to prevent burning of the skin. A potato buried directly in coals of a fire cooks very nicely, with a mostly burned and inedible skin. A baked potato is fully cooked when its internal temperature reaches 99 °C (210 °F).

Once a potato has been baked, some people discard the skin and eat only the softer and moister interior, while others enjoy the taste and texture of the crisp skin, which is rich in dietary fiber. Potatoes baked in their skins may lose between 20 and 40% of their vitamin C content because heating in air is slow and vitamin inactivation can continue for a long time. Small potatoes bake more quickly than large ones and therefore retain more of their vitamin C. Despite the popular misconception that potatoes are fattening, baked potatoes can be used as part of a healthy diet.

Some people bake their potatoes and then scoop out the interior, leaving the skin as a shell. The white interior flesh can then be mixed with various other food items such as cheese, butter, or bacon bits. This mixture is then spooned back into the skin shells and they are replaced in the oven to warm through. In America these are known variously as loaded potato skins, filled potatoes and twice baked potatoes. In Great Britain, toppings or fillings tend to be more varied than they are in America: baked beans, curried chicken, tuna, and prawn fillings are popular, and in Scotland even haggis is used as a filling for jacket potatoes.

A variation is Hasselback potatoes, where the potato is cut into very thin slices almost down the bottom, so that the potato still holds together, and is then baked in the oven, occasionally scalloped with cheese. The proper noun "Hasselback" refers to the luxurious Hasselbacken hotel and restaurant in Stockholm which originated this dish.