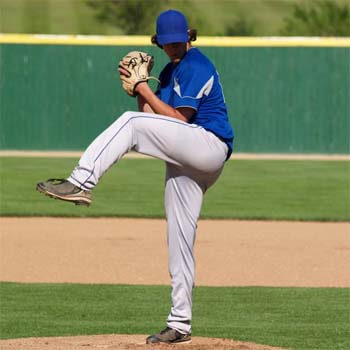 In baseball, a pitcher can commit a number of illegal motions or actions that constitute a balk. Most of these violations involve a pitcher pretending to pitch when he has no intention of doing so. In games played under the Official Baseball Rules that govern all professional play in the United States and Canada, a balk results in a dead ball or delayed dead ball. In certain other circumstances, a balk may be wholly or partially disregarded. Under other rule sets, notably in the United States under the National Federation of High Schools (Fed or Federation) Baseball Rules, a balk results in an immediate dead ball. In the event a balk is enforced, the pitch is generally (but not always) nullified, each runner is awarded one base, and the batter (generally) remains at bat, and with the previous count. The balk rule in Major League Baseball was introduced in 1898.

A pitcher is restricted to a certain set of motions and one of two basic pitching positions before and during a pitch; if these regulations are violated with one or more runners on base, an umpire may call a balk. The batter at home plate does not advance on a balk.

With a runner on base and the pitcher on or astride (with one leg on each side of) the rubber, under Official Baseball Rules, it is a balk when the pitcher:

The pitcher's acts of spitting on the ball, defacing or altering the ball, rubbing the ball on the clothing or body, or applying a foreign substance to the ball are not balks; however, it will result in the pitcher's ejection from the game if caught.

A pitcher was allowed to feint toward third (or second) base, and then turn and throw or feint to first base if his pivot foot disengages the rubber after his initial feint. This is called the "fake to third, throw to first" play. However, Major League Baseball classified this as a balk beginning with the 2013 season.

If no runners are on base and the pitcher commits an otherwise balkable action, there generally is no penalty. However, delivering a quick return or pitching while off the rubber (which constitute balks when runners are on base) results in a ball being called with the bases empty. If the pitcher should commit an act confusing to the batter with nobody on, or if he stops his delivery or otherwise violates because the batter steps out or otherwise acts confusingly, time is called and the play restarted without penalty (whether or not runners are on base). If a pitcher repeatedly commits illegal actions without runners on base, he may be subject to ejection for persistently violating the rules.

If, during an attempt to execute the "hidden ball trick" (where the defensive team deceives the runner(s) as to the ball's location while the play is live), the pitcher stands on the rubber prior to the fielder revealing the ball and applying the tag, the runner is not out. Instead, it is a balk, with all runners on base being awarded their next base.

Catcher's balk is not a term in the official rules, but is sometimes used to describe the infrequent situation when the catcher is not completely within the catcher's box when the pitcher releases the ball in his delivery during an intentional walk. The balk is still charged to the pitcher, because such a pitch is defined as a "Pitcher Illegal Action."

A pitcher is not required to step off the rubber before throwing to an occupied base in a pick-off attempt. With his foot on the rubber in either the windup position or the "set" position, the pitcher may either: 1) deliver the ball to the batter: 2) throw to a base for a pickoff; or 3) step off the rubber.

MLB rules state that: "Pitchers shall take signs from the catcher while in contact with the pitcher’s plate" (the rubber), but the rules do not describe the infraction as a balk.