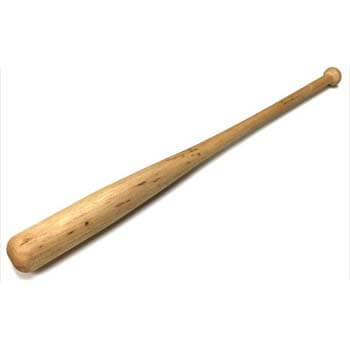 A baseball bat is divided into several regions. The "barrel" is the thick part of the bat, where it is meant to hit the ball. The part of the barrel best for hitting the ball, according to construction and swinging style, is often called the "sweet spot." The end of the barrel is called the "top," "end," or "cap" of the bat. Opposite the cap, the barrel narrows until it meets the "handle," which is comparatively thin, so that batters can comfortably grip the bat in their hands. Sometimes, especially on metal bats, the handle is wrapped with a rubber or tape "grip". Finally, below the handle is the "knob" of the bat, a wider piece that keeps the bat from slipping from a batter's hands.

Lumber is an often-used slang term for a bat, especially when wielded by a particularly able batter.

Baseball bats are made of either wood, or a metal alloy (typically aluminum). Most wooden bats are made from ash; other woods include maple, hickory, and bamboo. Hickory has fallen into disfavor over its greater weight, which slows down bat speed, while maple bats gained popularity following the introduction of the first major league sanctioned model in 1997. The first player to use one was Joe Carter of the Toronto Blue Jays. Barry Bonds used maple bats the seasons he broke baseball's single-season home run record in 2001, and the career home run record in 2007. In 2010, the increased tendency of maple bats to shatter caused Major League Baseball to examine their use, banning some models in minor league play.

Manufacturers position each bat's label over the mechanically weaker side of the wood. To reduce chance of fracture, and maybe deliver more energy to the ball, a bat is intended to be held so the label faces sky or ground when it strikes the ball during a horizontal swing. In this orientation, the bat is considered stiffer and less likely to break.

Different types of wood will fracture differently. For bats made of ash, labels will generally be where the grain spacing is widest. For maple bats they will usually be positioned where grain is tightest.

Maple bats in particular were once known (circa 2008) to potentially shatter in a way that resulted in many sharp edges, sometimes creating more dangerous projectiles when it broke. Maple bat manufacture evolved significantly, in cooperation with Major League Baseball, paying special attention to grain slope, and including an ink spot test to confirm safest wood grain orientation.

Based on consistent anecdotal reports of sales at sporting goods stores, Maple appears to be displacing Ash as most popular new baseball bat material in the United States. Next and rising in popularity is Bamboo, which has more isotropic fine grain, great strength, and less weight for a bat of any given size.

Within league standards there is ample latitude for individual variation, many batters settling on their own bat profile, or one used by a successful batter. Formerly, bats were hand-turned from a template with precise calibration points; today they are machine-turned to a fixed metal template. Historically significant templates may be kept in a bat manufacturers' vault; for example, Babe Ruth's template, which became popular among major-league players, is R43 in the Louisville Slugger archives. Ruth favored a thinner handle than was the norm in the 1920s, and his success caused most to follow.

Once the basic bat has been turned, it has the manufacturer's name, the serial number, and often the signature of the player endorsing it branded into it opposite the wood's best side. Honus Wagner was the first player to endorse and sign a bat. Next, most bats are given a rounded head, but some 30% of players prefer a "cup-balanced" head, in which a cup-shaped recess is made in the head; this lightens the bat and moves its center of gravity toward the handle. Finally, the bat is stained in one of several standard colors, including natural, red, black, and two-tone blue and white.