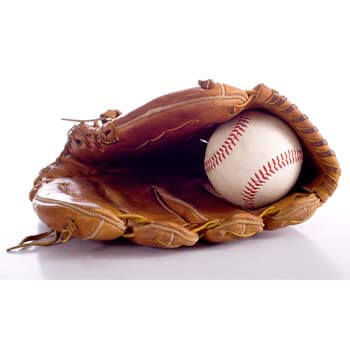 A baseball glove or mitt is a large leather glove worn by baseball players of the defending team, which assists players in catching and fielding balls hit by a batter or thrown by a teammate.

By convention, the glove is described by the handedness of the intended wearer, rather than the hand on which the glove is worn: a glove that fits on the left hand—used by a right-handed thrower—is called a right-handed (RH) or "right-hand throw" (RHT) glove. Conversely, a left-handed glove (LH or LHT) is worn on the right hand, allowing the player to throw the ball with the left hand.

Baseball gloves are measured by starting at the top of the index finger of the glove and measuring down the finger, along the inside of the pocket and then out to the heel of the glove. Gloves typically range in size from 9 inches (youth starter size) to 12.75 inches for adult outfield play. Catcher's mitts, unlike those of other gloves, are measured around the circumference, and they typically have 32- to 34-inch patterns.

The shape and size of a glove is described by its pattern. Modern gloves have become quite specialized, with position-specific patterns: