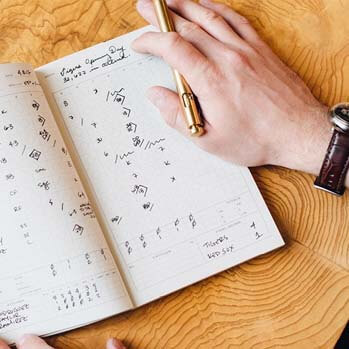 Baseball scorekeeping is the practice of recording the details of a baseball game as it unfolds. Professional baseball leagues hire official scorers to keep an official record of each game (from which a box score can be generated), but many fans keep score as well for their own enjoyment. Scorekeeping is usually done on a printed scorecard and, while official scorers must adhere precisely to one of the few different scorekeeping notations, most fans exercise some amount of creativity and adopt their own symbols and styles.

Some symbols and abbreviations are shared by nearly all scorekeeping systems. For example, the position of each player is indicated by a number:

The designated hitter (DH), if used, is marked using a zero (0).

Scorecards vary in appearance but almost all share some basic features, including areas for:

Usually two scorecards (one for each team) are used to score a game.

There is no authoritative set of rules for scorekeeping. The traditional method has many variations in its symbols and syntax, but this is a typical example. In the traditional method, each cell in the main area of the scoresheet represents the "lifetime" of an offensive player, from at-bat, to baserunner, to being put out, scoring a run, or being left on base.

If a batter reaches first base, either due to a walk, a hit, or an error, the basepath from home to first base is drawn, and the method described in the lower-righthand corner. For example:

When a runner advances due to a following batter, it can be noted by the batting position or the uniform number of the batter that advanced the runner. This kind of information is not always included by amateur scorers, and there is a lot of variation in notation. For example:

End of an inning – When the offensive team has made three outs, a slash is drawn diagonally across the lower right corner of the cell of the third out. After each half-inning, the total number of hits and runs can be noted at the bottom of the column. After the game, totals can be added up for each team and each batter.

Extra innings – There are extra columns on a scoresheet that can be used if a game goes to extra innings, but if a game requires more columns, another scorecard will be needed for each team.

Substitutions – When a substitution is made, a vertical line is drawn after the last at-bat for previous player, and the new player's name and number is written in the second line of the Player Information section. A notation of PH or PR should be made for pinch hit and pinch run situations.

Batting around – After the ninth batter has batted, the record of the first batter should be noted in the same column. However, if more than nine batters bat in a single inning, the next column will be needed. Draw a diagonal line across the lower left hand corner, to indicate that the original column is being extended.