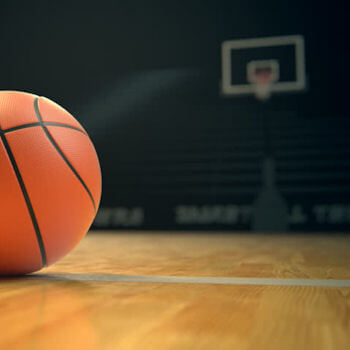 In basketball, the basketball court is the playing surface, consisting of a rectangular floor, with baskets at each end. In professional or organized basketball, especially when played indoors, it is usually made out of a wood, often maple, and highly polished and completed with a 10 foot rim. Outdoor surfaces are generally made from standard paving materials such as concrete or asphalt.

Basketball courts come in different sizes. In the National Basketball Association (NBA), the court is 94 by 50 feet (28.7 by 15.2 m). Under International Basketball Federation (FIBA) rules, the court is slightly smaller, measuring 28 by 15 meters (91.9 by 49.2 ft). In amateur basketball, court sizes vary widely. The baskets are always 10 feet (3.05 m) above the floor (except possibly in youth competition). Basketball courts have a three-point arc at both baskets. A basket made from behind this arc is worth three points; a basket made from within this line, or with a player's foot touching the line, is worth 2 points. The free-throw line, where one stands while taking a foul shot, is located within the three-point arc at 15 feet from the basket. A foul shot is worth 1 point, but if a shot is made from the foul line while in play it is still worth 2 points.

The only two players permitted to enter the center circle prior to the tipoff are the players contesting the jump ball (usually but not always centers). Both players jump when the referee throws the ball in the air, each attempting to tap the ball into the hands of a player of their own team.

The distance to the three-point line from the center of the basket varies depending on the level or league, and has changed several times. These are the current distances, with the league or level using each distance:

In most high school associations in the United States, the distance is 19.75 feet. This was formerly the distance for college basketball as well. On May 26, 2007, the NCAA playing rules committee agreed to move the three-point line back one foot to 20.75 feet for the men. This rule went into effect for the 2008–2009 season. The three-point line for women (NCAA) moved back one foot to 20.75 feet at the start of the 2011–2012 season.

The low post is defined as the areas that are closest to the basket but outside of the free throw lane.[4] This area is fundamental to strategy in basketball. Skilled low post players can score many points per game without ever taking a jump shot.

The key, free throw lane or shaded lane refers to the usually painted area beneath the basket; for the NBA it is 16 feet (4.9 m) wide, for the NCAA it is 12 feet (3.7 m) wide; for both instances it extends 15 feet (4.6 m) from the backboard. At the top of the rectangle is the free throw line, behind which players shoot uncontested shots when they're fouled. A circle is drawn around the free-throw line with a 6 feet (1.8 m) radius; this is used for jump ball instances, as is done at the center circle. Two 6-inch hash lines, 3 ft from the free throw lane line and 5 ft 8 in from the free throw line, show the lower defensive box linked to the restricted area.

The key is primarily used to prevent players from staying beneath the basket of the opponents' team for long periods (maximum three seconds).

The no charge zone arc is a semi-circular arc drawn around the area directly underneath the basket. With some exceptions, members of the defending team cannot draw charging fouls in this area. The no charge zone arc in all North American rule sets above high school level (NCAA men's and women's, NBA, and WNBA) has a radius 4 feet (1.22 m) from below the center of the basket. The no charge zone arc rule first appeared at any level of basketball in the NBA in the 1997-98 season. The NCAA restricted area arc was originally established for the 2011–12 men's and women's seasons at a 3-foot (0.91 m) radius from below the center of the basket, and was extended to match the 4-foot radius for the 2015–16 season and beyond.

On NBA floors, two hash marks are drawn at the end lines near the key to mark the area known as the lower defensive box. A defensive player is allowed to draw a charging foul within the restricted arc if the offensive player receives the ball and/or starts his drive within this area.

Also, two lines are drawn on each of the sidelines, 28 feet from each of the endlines, which designates the extent of the coaching box and bench. This line marks the farthest extent a coach (aside from the sidelines) can stand. Directly behind this area is the team bench.

On the half-court line of NBA floors two lines extend outside the playing court, designating the place where substitutes wait before they can enter the playing court; directly behind this area are the various off-court officials such as the timekeeper and reserve referee.