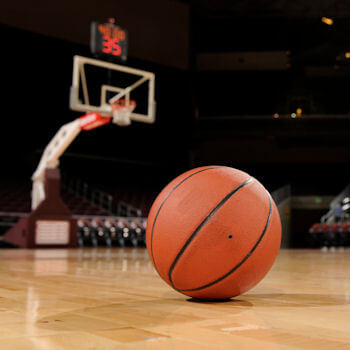 Typically the point guard is the leader of the team on the court. This position requires substantial ball handling skills and the ability to facilitate the team during a play. The shooting guard, as the name implies, is often the best shooter. As well as being capable of shooting accurately from longer distances, this position tends to also be the best defender on the team. The small forward often has an aggressive approach to the basket when handling the ball. The small forward is also known to make cuts to the basket in efforts to get open for shots. The power forward and the center are usually called the "frontcourt", often acting as their team's primary rebounders or shot blockers, or receiving passes to take inside shots. The center is typically the larger of the two.

Historically, only three positions were recognized (two guards, two forwards, and one center) based on where they played on the court: Guards generally played outside and away from the hoop and forwards played outside and near the baseline, with the center usually positioned in the key. During the 1980s, team strategy evolved after the three-point shot was added to the game. More specialized roles developed, resulting in the five position designations used today. However, individual team strategy and availability of personnel can alter the positions used by a particular team. For example, the dribble-drive motion offense and the Princeton offense use four interchangeable guards and one center. This set is also known as a "four-in and one-out" play scheme. Other combinations are also prevalent.

The point guard (PG), also known as the one, is typically the team's best ball handler and passer. Therefore, they often lead their team in assists and are able to create shots for themselves and their teammates. They are often quick and are able to hit shots either outside the three-point line or "in the paint", largely depending on the player's skill level. Point guards are looked upon as the "floor general" or the "coach on the floor". They should study the game and game film to be able to recognize the weaknesses of the defense, and the strengths of their own offense. They are responsible for directing plays, making the position equivalent to that of quarterback in American football, playmaker in association football (soccer), center in ice hockey, or setter in volleyball. Good point guards increase team efficiency and generally have a high number of assists. They are often referred to as dribblers or play-makers. In the NBA, point guards are usually the shortest players on the team and are mostly 6 feet 4 inches (1.93 m) or shorter.

Small forwards have a variety of assets, such as quickness and strength inside. One common thread among all kinds of small forwards is an ability to "get to the line" and draw fouls by aggressively attempting (post-up) plays, lay-ups, or slam dunks. As such, accurate foul shooting is a common skill for small forwards, many of whom record a large portion of their points from the foul line. Besides being able to drive to the basket, they are also good shooters from long range. Some small forwards have good passing skills, allowing them to assume point guard responsibilities as point forwards. Small forwards should be able to do a little bit of everything on the court, typically playing roles such as swingmen and defensive specialists. In the NBA, small forwards usually range from 6 feet 6 inches (1.98 m) to 6 feet 10 inches (2.08 m).

The power forward (PF), also known as the four, often plays a role similar to that of the center, down in the "post" or "low blocks". The power forward is often the team's most versatile scorer, being able to score close to the basket while also being able to shoot mid-range jump shots from 12 to 18 feet from the basket. Some power forwards have become known as stretch fours, since extending their shooting range to three-pointers. On defense, they are required to have the strength to guard bigger players close to the basket and to have the athleticism to guard quick players away from the basket. Most power forwards tend to be more versatile than centers since they can be part of plays and are not always in the low block. In the NBA, power forwards usually range from 6 feet 8 inches (2.03 m) to 7 feet 0 inches (2.13 m).

The center (C), also known as the five, usually plays near the baseline or close to the basket (the "low post"). They are usually the tallest players on the floor. The center usually scores "down low," or "in the paint" (near the basket, in the key), but some can be good perimeter shooters. They are typically skilled at gathering rebounds, contesting shots and setting screens on plays.

The center position has been traditionally considered one of the most important positions, if not the most important. The range of players used in the position has transitioned from relatively slower but much taller "back to the basket" players to players who would normally be classified as power forwards but can dominate the position with their defensive skills, or mismatch ability to shoot from the high post. This has been due to the scarcity of players possessing the combination of great skill, ideal height, and durability. This has been matched by the development of more fast-paced and athletic basketball play, which calls for less traditional center play and a more up-and-down the court playstyle. In the NBA, centers are usually 6 feet 10 inches (2.08 m) or taller.