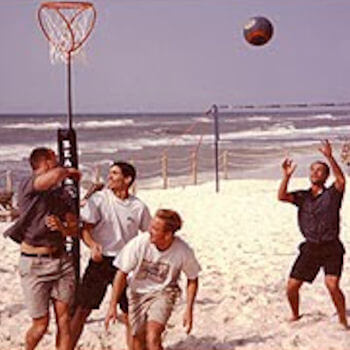 Beach Basketball is a modified version of basketball, played on beaches. It was invented in the United States by Philip Bryant.

Beach basketball is played in a circular court with no backboard on the goal and no out-of-bounds rule, with the ball movement to be done via passes or 2½ steps, as dribbling is next to impossible on sand. Beach basketball has become a very popular, widespread competitive sport. Fifteen Annual World Championships have been organized.

In Germany beach basketball, or "Beachbasketball" as it is written in German, is played in a way that is similar to basketball. The beach court is smaller than a standard basketball court and without lines. Over the year, several tournaments are held, ending in the German championship which is organized by the German basketball federation. Within this tournaments various beach basketball teams play against each other.

Rules for the sport are: