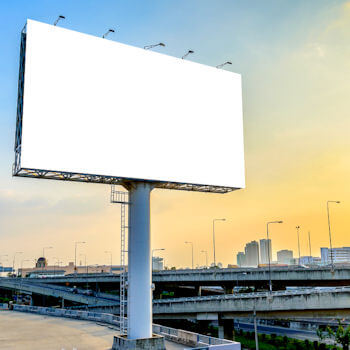 A billboard (also called a hoarding in the UK and many other parts of the world) is a large outdoor advertising structure (a billing board), typically found in high-traffic areas such as alongside busy roads. Billboards present large advertisements to passing pedestrians and drivers. Typically showing witty slogans and distinctive visuals, billboards are highly visible in the top designated market areas.

The largest ordinary-sized billboards are located primarily on major highways, expressways or principal arterials, and command high-density consumer exposure (mostly to vehicular traffic). These afford greatest visibility due not only to their size, but because they allow creative "customizing" through extensions and embellishments.

Posters are the other common form of billboard advertising, located mostly along primary and secondary arterial roads. Posters are a smaller format and are viewed principally by residents and commuter traffic, with some pedestrian exposure.

Billboard advertisements are designed to catch a person's attention and create a memorable impression very quickly, leaving the reader thinking about the advertisement after they have driven past it. They have to be readable in a very short time because they are usually read while being passed at high speeds. Thus there are usually only a few words, in large print, and a humorous or arresting image in brilliant color.

Some billboard designs spill outside the actual space given to them by the billboard, with parts of figures hanging off the billboard edges or jutting out of the billboard in three dimensions. An example in the United States around the turn of the 21st century was the Chick-fil-A billboards (a chicken sandwich fast food chain), which had three-dimensional cow figures in the act of painting the billboards with misspelled anti-beef slogans such as "frendz don't let frendz eat beef."

The first "scented billboard", an outdoor sign emitting the odors of black pepper and charcoal to suggest a grilled steak, was erected on NC 150 near Mooresville, North Carolina by the Bloom grocery chain. The sign depicted a giant cube of beef being pierced by a large fork that extended to the ground. The scents were emitted between 7–10 am and 4–7 pm from 28 May 2010 through 18 June 2010.

Almost all these billboards were painted in large studios. The image was projected on the series of paper panels that made up the billboard. Line drawings were done, then traced with a pounce wheel that created perforated lines. The patterns were then "pounced" onto the board with a chalk filled pounce bag, marking the outlines of the figures or objects. Using oil paints, artists would use large brushes to paint the image. Once the panels were installed using hydraulic cranes, artists would go up on the installed billboard and touch up the edges between panels. These large, painted billboards were especially popular in Los Angeles where historic firms such as Foster & Kleiser and Pacific Outdoor Advertising dominated the industry. Eventually, these painted billboards gave way to graphic reproduction, but hand-painted billboards are still in use in some areas where only a single board or two is required. The "Sunset Strip" in Los Angeles is one area where hand-painted billboards can still be found, usually to advertise upcoming films or albums.

A digital billboard is a billboard that shows varying imagery and text created from computer programs and software. Digital billboards can be designed to display running text, display several different displays from the same company, and even provide several companies a certain time slot during the day. The constantly changing texts ensure maximum impact and wide exposure to target audiences. The ability to schedule advertisements remotely, in combination with flexible real-time scheduling, has allowed for a decrease in traditional upkeep and maintenance costs. Additionally, digital billboards are continually integrating with real-time advertisement technologies to measure audiences or serve dynamic content. In January 2015, Ooh! Media launched a campaign with Porsche that detected incoming Porsche cars and displayed a dynamic piece of relevant content to Porsche drivers.

In May 2014, Beck's Beer released a billboard poster that plays audio. Conductive ink linked to sensors and speakers means that when touched, the poster begins to play music. The beer company claim it to be 'the world's first playable music poster'. However, Agency Republic released the Spotify Powered Interactive Music Poster in April 2012. Creative agency, Grey London collaborated on a similarly interactive poster using touch sensitive inks in April 2014.

Outdoor Advertising, such as a mobile billboard, is effective because it is difficult to ignore. According to a UK national survey, it is also memorable. Capitol Communications Group found that 81.7% of those polled recalled images they saw on a moving multi-image sign.[citation needed] This is compared to a 19% retention rate for static signs.

Unlike a typical billboard, mobile billboards are able to go directly to their target audience. They can be placed wherever there is heavy foot traffic due to an event – including convention centers, train stations, airports and sports arenas. They can repeat routes, ensuring that an advertiser's message is not only noticed, but that information is retained through repetition.

Common along highways are free-standing two-sided as well as three-sided billboards. Other types of billboards include the billboard bicycle attached to the back of a bicycle or the mobile billboard, a special advertising trailer to hoist big banners. Mechanical billboards display three different messages, with three advertisements attached to a conveyor inside the billboard. There are also three-dimensional billboards, such as the ones at Piccadilly Circus, London.