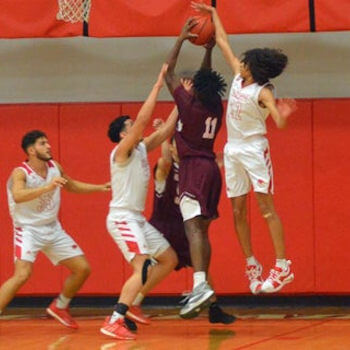 In basketball, a block or blocked shot occurs when a defensive player legally deflects a field goal attempt from an offensive player to prevent a score. The defender is not allowed to make contact with the offensive player's hand (unless the defender is also in contact with the ball) or a foul is called. In order to be legal, the block must occur while the shot is traveling upward or at its apex. A deflected field goal that is made does not count as a blocked shot and simply counts as a successful field goal attempt for shooter plus the points awarded to the shooting team. For the shooter, a blocked shot is counted as a missed field goal attempt. Also, on a shooting foul, a blocked shot cannot be awarded or counted, even if the player who deflected the field goal attempt is different from the player who committed the foul. If the ball is heading downward when the defender hits it, it is ruled as goaltending and counts as a made basket. Goaltending is also called if the block is made after the ball bounces on the backboard (NFHS excepted; the NCAA also used this rule until the 2009–10 season).

Largely due to their height and position near the basket, centers and power forwards tend to record the most blocks, but shorter players with good jumping ability can also be blockers, an example being Dwyane Wade, the shortest player, at 6'4", to record 100 blocked shots in a single season. A player with the ability to block shots can be a positive asset to a team's defense, as they can make it difficult for opposing players to shoot near the basket and by keeping the basketball in play, as opposed to swatting it out of bounds, a blocked shot can lead to a fast break, a skill Bill Russell was notable for. To be a good shot-blocker, a player needs great court sense and timing, and good height or jumping ability. One tactic is that a shot-blocker can intimidate opponents to alter their shots, resulting in a miss.