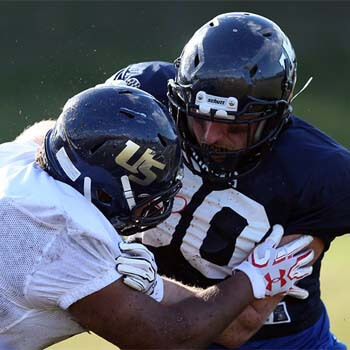 In American football, blocking or interference (or running interference) involves legal movements in which one player obstructs another player's path with their body. The purpose of blocking is to prevent defensive players from tackling the ball carrier, or to protect a quarterback who is attempting to pass or hand off the ball. Offensive linemen and fullbacks tend to do the most blocking, although wide receivers are often asked to help block on running plays and halfbacks may be asked to help block on passing plays, while tight ends perform pass blocking and run blocking if they are not running routes to receive passes. Overall, blocking is a skill that virtually every football player may be required to do at some point, even defensive players in the event of a turnover.

Essentially, blocking is pushing, with certain restrictions; in blocking one may not grasp another player or do any sort of pulling, and the hands must not extend beyond the line of each armpit; otherwise a holding penalty will be assessed. Blocking is also not permitted beyond five yards from the line of scrimmage until the quarterback has handed off the ball to a runner or a receiver has touched the ball after it has been passed.

Outside sports, "running interference" is a metaphor that refers to a person's helping someone in the performance of a task without directly assisting in the task. Often this is done by attracting attention to oneself (so as to deflect attention from the other person) or throwing oneself into harm's way.

Zone blocking is a technique that is a simple and effective scheme for creating lanes for running plays. In a zone blocking scheme, fleet-footedness and athletic ability trump size as desirable qualities in offensive linemen. Coordination and technique matter more than muscle in implementing a successful scheme because defensive linemen are often double-teamed at the point of attack. In this blocking scheme, which takes much from the Veer blocking system, creating movement on the defensive line is more important than opening a specific hole in the defense.

Using a running back out of the backfield, zone plays are usually categorized into three types: Inside Zone (IZ), Outside Zone (OZ) and Stretch. These types describe the initial landmark of the ball carrier. A common approach is: Inside the tackles for IZ, just outside the tackle for OZ and just inside the last offensive player for the stretch.

For each type of zone there are many different blocking schemes available:

Today every NFL team uses some form of zone blocking but not all of them rely on it entirely.

The linemen of some teams that use zone blocking schemes have been criticized for their alleged penchant for cut blocking the knees of defenders, sometimes away from the play. Cut blocks are legal unless a defensive player is engaged by another offensive player. Although some consider the technique unsportsmanlike because of the risk of serious injury, when taught and applied correctly it is a very effective tactic. In fact, some defensive players employ the technique to eliminate blockers so other defenders can make the tackle.

Players other than offensive linemen may enhance the success of a zone blocking scheme. For example, in a run-based spread attack like West Virginia's the primary responsibility of receivers is less to catch passes then to execute downfield blocks, springing the ball carrier and extending the run.