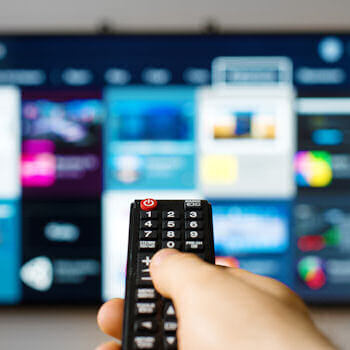 A "cable channel" (sometimes known as a "cable network") is a television network available via cable television. When available through satellite television, including direct broadcast satellite providers such as DirecTV, Dish Network and Sky, as well as via IPTV providers such as Verizon FIOS and AT&T U-verse is referred to as a "satellite channel". Alternative terms include "non-broadcast channel" or "programming service", the latter being mainly used in legal contexts. Examples of cable/satellite channels/cable networks available in many countries are HBO, Cinemax, MTV, Cartoon Network, AXN, E!, FX, Discovery Channel, Canal+, Eurosport, Fox Sports, Disney Channel, Nickelodeon, CNN International, and ESPN.

The abbreviation CATV is often used for cable television. It originally stood for Community Access Television or Community Antenna Television, from cable television's origins in 1948. In areas where over-the-air TV reception was limited by distance from transmitters or mountainous terrain, large "community antennas" were constructed, and cable was run from them to individual homes. The origins of cable broadcasting for radio are even older as radio programming was distributed by cable in some European cities as far back as 1924.