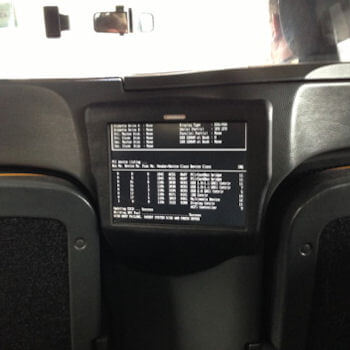 Cabvision started in 2000 with the London Millennium golden taxis campaign. Thousands of taxis have now been installed with Cabvision in central London. The creators of Cabvision are media and advertising executives Jonathan Marquis, a former senior advertising director of the Dentsu Group and Peter Da Costa, proprietor of KPM Taxis. Supported by a number of media and technology companies including IBM, Trident Microsystems and Liquid Digital, The passenger is given several choices at the beginning of each journey and may select from a variety of channels or mute. Cabvision was created as an entertainment, infotainment and advertising system, narrowcasting to a captive ABC1 London audience. Advertisers using the system have included Accenture, Barclays Bank and HSBC.

Cabvision was sold in 2010 to CNL and now forms part of Cabvision Network Ltd which designs, fits and operates payment systems, including passenger operated payment terminals to Licensed London Taxis. The company is regulated by Transport for London.

Cabvision is a digital information and advertising platform playing multiple channels. Channels are provided in recorded format segmented by commercial breaks. Know London is produced by Cabvision and is the default channel on the network. The Know London channel delivers live news, weather, sport, business and a selection of London centric short films.

The passenger is given choices both at the start and throughout the journey to select from the variety of channels via an arm rest remote control pad. The passenger may also pause or mute the screen.

Taxi drivers are paid by Cabvision to run the system in their vehicles.

The system is built into a PC located in the vehicle's boot running the Microsoft Windows XP operating system. The unit is designed to be housed in the new-style TX1, TXII and TX4 hackney carriages and connected to a TFT LCD screen between the fold-down passenger seats behind the driver.

Viewing data is collected and sent to the supplier via GPRS technology, emphasising the system's primary use as an advertising tool.