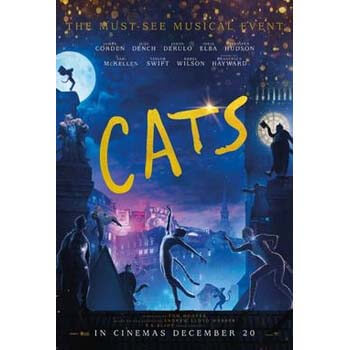 Cats is a 2019 musical fantasy film based on the stage musical of the same name by Andrew Lloyd Webber, which in turn was based on the poetry collection Old Possum's Book of Practical Cats (1939) by T. S. Eliot. The film is directed by Tom Hooper—in his second feature musical following Les Misérables (2012)—from a screenplay by Lee Hall and Hooper and features an ensemble cast, including James Corden, Judi Dench, Jason Derulo, Idris Elba, Jennifer Hudson, Ian McKellen, Taylor Swift, Rebel Wilson, and Francesca Hayward.

Cats was theatrically released in the United Kingdom and the United States on 20 December 2019, by Universal Pictures. The film received overwhelmingly negative reviews from critics, who criticized the CGI effects, plot, and tone, with many calling it one of the worst films of 2019. The film is projected to be a box-office bomb, having so far grossed $58 million on a $90 million budget.

Victoria, a young white cat, is dropped in the streets of London by her owner in the middle of the night. The alley cats witnessing this introduce themselves to her as the "Jellicles". Two toms, meek magician Mr. Mistoffelees who develops a crush on Victoria and the loyal Munkustrap, and two queens, the snooty Cassandra and Demeter, take Victoria under their wing and show her the world of the Jellicles as they hype up the Jellicle Ball, an annual ceremony where cats compete for the chance to go to the Heaviside Layer and be granted a new life.

Throughout the film, the competitors are introduced and express their contributions to the community: Jennyanydots, a domestic tabby, boosts the productivity of mice and roaches; the Rum Tum Tugger, a flirtatious tom who riles up the others; Bustopher Jones, a bourgeois cat who boasts about his weight and shares food scraps from the garbage; Skimbleshanks, a tidy ginger cat who taps along the railway; Gus, an aged theatre cat who has played some of the biggest roles in history; and Macavity, a villainous stray with the power to apparate and who kidnaps the other contestants (save for Tugger) in order to be made the Jellicle Choice by default.

Victoria also happens to meet the mischievous twins Mungojerrie and Rumpleteazer who enjoy causing trouble and messing with things in the house of their human family. They convince Victoria to join in the fun, but leave her tangled up in some necklaces when the family dog is alerted to their presence. Luckily, Mr. Mistoffelees comes to rescue Victoria, distracting the dog and escaping with her. They return to the group, just in time to see the arrival of the tribe's wise and beloved matriarch Old Deuteronomy. The Jellicle Ball commences inside the abandoned Egyptian Theatre. Victoria dances a ballet solo in the moonlight but is distracted by Cassandra harassing Grizabella, a former member of the tribe who was banished for, among other things, her past allegiance with Macavity. Victoria relates to Grizabella's feelings of abandonment. As Grizabella slinks away into the streets, Old Deuteronomy witnesses their quiet camaraderie and assures Victoria that she can become a Jellicle herself in time.

The Ball is interrupted by femme fatale Bombalurina, who performs a song and dance number dedicated to Macavity: a distraction to incapacitate the party with catnip. Macavity arrives, demanding to be made the Jellicle Choice. Old Deuteronomy deems him unworthy and is subsequently kidnapped and placed with Macavity's other victims. As the Jellicles recuperate, distraught over their leader's disappearance, Victoria suggests that Mr. Mistoffelees use his powers to conjure Old Deuteronomy back. He tries a few times, eventually making Old Deuteronomy reappear. The cats rejoice and praise Mr. Mistoffeles; he and Victoria dance together and become mates. Meanwhile, Jennyanydots, via a costume change, frees herself and the other cats kidnapped by Macavity. Macavity apparates away, leaving his lackey to walk the plank at the mercy of the emancipated cats.

Grizabella returns to the Egyptian. Victoria vouches for her and urges her to sing her true feelings. Grizabella proceeds to sing a passionate ballad about her mistakes, her former glory, and her beauty, sentiments that touch the hearts of the Jellicles. Old Deuteronomy names Grizabella the Jellicle Choice and sends her off to the Heaviside Layer in a chandelier (repaired by Mr. Mistoffelees' magic to float like a hot air balloon). Macavity, in one last attempt to reach the Heaviside Layer, leaps onto a rope from the chandelier but falls onto Nelson's Column. The Jellicles, reunited with their kidnapped brethren, and perched on a lion statue, watch Grizabella ascend as the morning sun appears above the horizon. After the congregation disperses, Old Deutoronomy welcomes Victoria to the tribe.