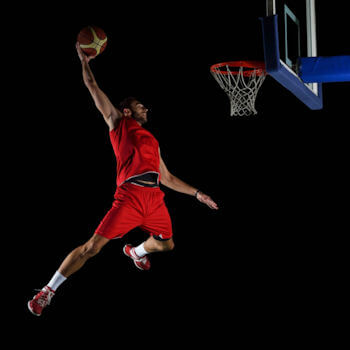 The center (C), also known as the five, or the big man, is one of the five positions in a regular basketball game. The center is normally the tallest player on the team, and often has a great deal of strength and body mass as well. In the NBA, the center is usually 6 feet 10 inches (2.08 m) or taller and usually weighs 240 pounds (110 kg) or more. They traditionally have played close to the basket in the low post. A center with the ability to shoot outside from three-point range is known as stretch five.

Playing in close proximity to the basket, which led to their ability to protect the own basket while scoring with high efficiency on the other end, the center position used to be the most important to fill for any NBA team, with George Mikan and Bill Russell being centerpieces of championship dynasties in the 1950s and 1960s. In recent decades, however, the importance of the center position has been diminished as the NBA basketball gradually became more perimeter-oriented, beginning with the addition of a three-point arc for the 1979–80 season up to the relaxation of the traveling rule in 2009–10, ushering in the prevalence of Euro-stepping, long-distance shooting wing players like James Harden and Stephen Curry.