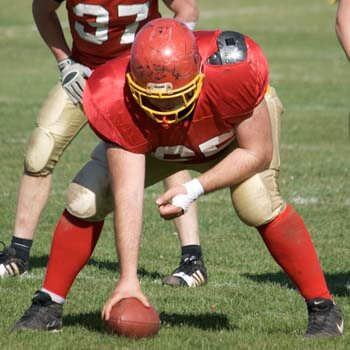 Center (C) is a position in American football and Canadian football (in the latter the position is spelled centre, following Commonwealth spelling conventions). The center is the innermost lineman of the offensive line on a football team's offense. The center is also the player who passes (or "snaps") the ball between his legs to the quarterback at the start of each play.

In recent years, the importance of centers for a football team has increased, due to the re-emergence of 3–4 defenses. According to Baltimore Ravens general manager Ozzie Newsome, "you need to have somebody who can neutralize that nose tackle. If you don't, everything can get screwed up. Your running game won't be effective and you'll also have somebody in your quarterback's face on every play."

The center's first role is to pass the football to the quarterback. This exchange is called a snap. Most offensive schemes make adjustments based on how the defensive line and linebackers align themselves in relation to the offensive line, and what gaps they line up in. Because the center has an ideal view of the defensive formation before the snap, he typically makes the first line call. This call is typically based on the position of the defensive linemen or linebackers in his gaps (0i-1i), most subsequent adjustments are dependent on this call. In some cases the center may call an adjustment for the entire offensive line. This was taken to an extreme by the Indianapolis Colts in the early 21st century, with center Jeff Saturday having equal say with quarterback Peyton Manning in play calling, including audibles. The center is therefore usually the most intelligent player on the offensive line, which is critical to a center's success.

Run Blocking: Run blocking assignments will vary based on the current play and the defensive formation when the ball is snapped. Typically, these assignments consist of the following:

In slang, the player receiving the snap is said to be "under center" if he receives the ball directly from the center (not in shotgun). This phrase is typically applied to quarterbacks, but has been used in reference to other positions as well.

On all special teams formations, the center is a long snapper. All NFL teams now have a specialized long snapper.

Although the quarterback commands the ball, it is the center's snap that renders the ball in play; the defensive line may not cross the line of scrimmage until the center snaps the football. An astute center can help draw an opposing team offside prior to the snap or potentially trick the other team into a penalty by quickly snapping the ball while the opposing team attempts to substitute players.

Under college and high school rules, the center, as a long snapper, may not be contacted until 1 second after the snap has been initiated. This will result in "roughing the center."

Additionally, a snap must be a continuous motion. If a center halts the snap motion, this draws the penalty of "illegal snap."

In college football, the Dave Rimington Trophy is awarded annually to the nation's most outstanding center.