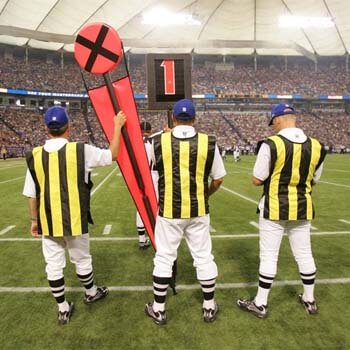 In football, the chain crew (commonly known as the "chain gang") is a crew that manages signal poles on one of the sidelines.

The chain crew, under the direction of the head linesman/down judge, signals the officials' decisions; it does not make decisions. Players look to the chain crew to see the down number and the line to gain. Officials may rely on the chain crew after a play (incomplete pass or penalty) whose outcome depends on the original spot of the ball.

Three members of the chain crew hold poles upright. The bottom of each pole is placed along a sideline to denote a line across the gridiron to the opposite sideline.

1. A "rod man" holds the "rear rod" that marks the beginning of the current set of downs.

2. Another "rod man" holds the "forward rod" ten yards toward the defense's goal-line from the rear rod. This marker indicates the line to gain, which the offense must reach in their series of four downs in order to retain possession of the ball. The two rods (sometimes known as "sticks") are attached at the bottom by a chain exactly ten yards long. The chain is always taut so that the rods are ten yards apart.

3. The "box man" holds a pole that marks the line of scrimmage.

The chain crew does not wear protective gear as players do. A routine instruction by officials to the chain crew is to withdraw or drop their signals, and move back, if the play comes toward them so as to endanger them. The signals often use bright orange color and are padded to minimize injury.

For professional and college football games, an auxiliary chain crew operates on the opposite side of the field, supervised by the line judge. Their presence lets players and officials look to either side of the field for information. The auxiliary chain crew also includes the drive start indicator, which is placed at the beginning of a team's drive and stays there until the team loses possession. This indicator is only used for statistical purposes to calculate the distance of each drive. It looks similar to a "stick" and has an arrow (or occasionally a large "X") that points in the direction the offensive team is going.

The NFL previously used an additional fourth chain crew member, which held a rod marked with an X to mark the spot of the last drive start. The X marker was eliminated in 2018.

At the start of a series of downs, the linesman stands so that the heel of one foot marks the initial line of scrimmage. The box man places his indicator to mark this position and sets the box to display "1". The operator of the rear rod marks the same position, while the other rod man moves ten yards toward the defense's goal line to mark the line to gain.

The linesman, the box man, or a fourth member of the chain crew attaches a "clip" to the chain to line up with the rear edge of the closest five-yard line to the rear rod. A device on the clip indicates which numbered line this is. The clip and the device let the chain crew restore the position of the rods after a mishap. In leagues such as the NFL with Instant Replay, there may be multiple clips to let the rods be repositioned after a play is reviewed and reversed.

After a typical play, the box man increments the displayed number and realigns that pole to the new line of scrimmage, again as directed by the linesman. After a play that results in a first down, all three members move and reset their signals to mark a new series of downs.

The chain crew must not move until the referee or linesman signals whether the play finished without a penalty. On a penalty, the chain crew stays put so that the officials can see the original state. When the referee and linesman walk off the appropriate number of yards, the box man moves as well. The box man does not change the number displayed, except on a penalty that results in a loss of down. On a penalty that results in a first down, the entire chain crew moves and resets.

When possession of the ball switches to the other team, the forward rod becomes the rear rod and vice versa to minimize the distance the rod men have to move. However, at the end of the first and third quarters, when players switch directions on the field, the chain crew also moves (for example, a marker may move from one 32-yard line to the other 32-yard line). The rear rod man moves past the forward rod man and continues to mark the start of the series of downs, in the new orientation. The linesman and other officials supervise this movement, using one or more clips to exactly reposition the chains.

On plays where there is no line to gain (a series of downs that starts within 10 yards of the goal line, a try after touchdown, or a kickoff), the rod men lower or lay down their signals, but the box man continues to mark the line of scrimmage.

Before the game, many linesmen attach a piece of tape at the midpoint of the chain. The linesman can compare the line of scrimmage to this mark at the start of a play and know whether a 5-yard penalty against the defense will result in a first down. If so, the linesman's typical hand signal to the line judge across the field is to extend the arms with the thumbs pointing toward one another. Such a gesture with thumbs pointing away signals that there are more than 5 yards to gain.