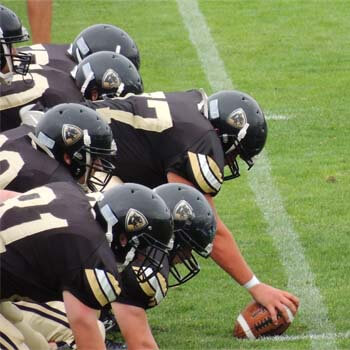 In football, clock management is the manipulation of a game clock and play clock to achieve a desired result, typically near the end of a match. It is analogous to "running out the clock" (and associated counter-tactics) seen in many sports, and the act of trying to hasten the game's end is often referred to by this term. Clock managements strategies are a significant part of American football, where an elaborate set of rules dictates when the game clock stops between downs, and when it continues to run.

Each team is given three timeouts per half which they can use to stop the clock from running after a play. In the NFL, teams get two timeouts in a preseason or regular season overtime period, or three in a postseason overtime half.

On a fair-catch punt, the clock starts at the snap and stops at the end of the play.

A team on offense that has the higher score seeks to use as much time as possible. A drive that scores no points may nevertheless benefit the team by taking time off the clock. The team may:

The team may use counterintuitive game plans, such as declining to score or allowing the opponents to score, to accelerate the end of the game.

If the defense does not have enough time-outs to stop the clock before the ball is turned over on downs, the offense can run out the clock by executing repeated quarterback kneels until the clock runs out. In the NFL and college football, up to 40 seconds can be taken off the clock between plays. The NFL also has a built-in two-minute warning that stops the clock after the play that occurs when the clock hits two minutes ends. In order to successfully run out the clock by kneeling, there must be less than 40 seconds on the clock if the opponent has two time-outs, 1 minute 20 seconds if the opponent has one time-out, or 2 minutes if the defense has no time-outs remaining, at the beginning of the series of downs. The offense can burn further time off the clock by timewasting: keeping the ball live (and the clock running) simply by keeping away from any defensive player, regardless of position on the field.

A team on offense that has the lower score seeks to conserve time. The team may:

A team that is tied or trailing by one or two points but is within the red zone (and thus in easy field goal range) seeks to burn a specific amount of time off the clock, such that they can stop the clock with five or fewer seconds on the clock, so that their placekicker can kick a field goal with no time remaining and win the game.

A team on defense has little control over the pace of the game. It may expend its timeouts to ensure that there is adequate time left on the clock, in case the team regains possession. The defense can make decisions on how to stop the ball carrier based on whether the team is trailing or leading: if the offense is trying to conserve time, the defense can foil that by tackling the ball carrier in-bounds before they can get out of bounds. Defenses likewise can safely devote more personnel to the perimeter and leave the center of the field and areas near the line of scrimmage less defended, as an offense that cannot afford to keep the clock running will have to throw toward the sidelines (see also: prevent defense). The only recourse a team has once the game has progressed to the point where the opposing offense can run out the clock with kneels is to deliberately ram the opposing center into his quarterback, hoping to disrupt the snap and cause a fumble; Greg Schiano is known for this strategy, but it is otherwise considered poor sportsmanship and rarely used.

Various rules ensure that the defense cannot deliberately commit fouls to manipulate the game clock, and in the most extreme such cases, an unfair act can be declared and the game forfeited to the offense. (Likewise, if the offense commits fouls to burn off time and get extra downs, the clock is reset and unsportsmanlike conduct is called on them.)

In Canadian football, a team trailing by one point or tied has an additional option: a ball can be kicked from anywhere on the field in that sport, and balls kicked into or through the end zone and not returned score a single point. This allows a team trailing by one to advance the ball upfield, then punt the ball toward the end zone in hopes of tying the game for one point (the player could also drop kick the ball, which would allow the kicking team to win on a field goal if kicked through the uprights). To prevent this scenario, defending teams will place their punter in the end zone to retrieve the ball and kick it back out of the end zone, preventing that single point from being scored.

Several of the strategies discussed above for American football above can be used in the Canadian code, however rule differences mean that running out the clock much more difficult:

These differences make for radically different endgames if the team with the lead has the ball. In the NFL, a team can run 120 seconds (2 minutes)--and slightly more in the NCAA--off the clock without gaining a first down (assuming that the defensive team is out of timeouts). In the Canadian game, just over 40 seconds can be run off.