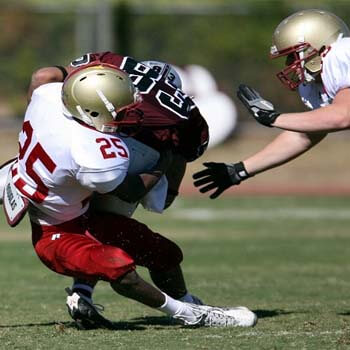 It is in college football where a player's performance directly impacts his chances of playing professional football. The best collegiate players will typically declare for the professional draft after three to four years of collegiate competition, with the NFL holding its annual draft every spring in which 256 players are selected annually. Those not selected can still attempt to land an NFL roster spot as an undrafted free agent.

Football teams in Division I are further divided into the Bowl Subdivision (consisting of the largest programs) and the Championship Subdivision. The Bowl Subdivision has historically not used an organized tournament to determine its champion, and instead teams compete in post-season bowl games. That changed with the debut of the four-team College Football Playoff at the end of the 2014 season.

Teams in each of these four divisions are further divided into various regional conferences.

Several organizations operate college football programs outside the jurisdiction of the NCAA:

A college that fields a team in the NCAA is not restricted from fielding teams in club or sprint football, and several colleges field two teams, a varsity (NCAA) squad and a club or sprint squad (no schools, as of 2019, field both club and sprint teams at the same time).