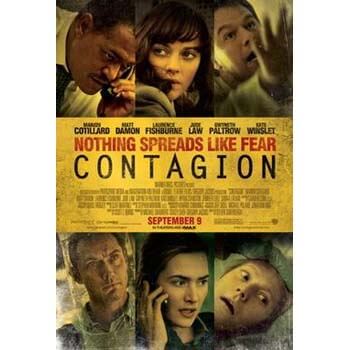 Contagion is a 2011 American thriller film directed by Steven Soderbergh. Its ensemble cast includes Marion Cotillard, Bryan Cranston, Matt Damon, Laurence Fishburne, Jude Law, Gwyneth Paltrow, Kate Winslet, and Jennifer Ehle. The plot concerns the spread of a virus transmitted by fomites, attempts by medical researchers and public health officials to identify and contain the disease, the loss of social order in a pandemic, and finally the introduction of a vaccine to halt its spread. To follow several interacting plot lines, the film makes use of the multi-narrative "hyperlink cinema" style, popularized in several of Soderbergh's films.

Soderbergh and screenwriter Scott Z. Burns had collaborated on The Informant! (2009). Following that film's release, Burns brought up the idea of producing a medical thriller film depicting the rapid spread of a virus, which was inspired by various pandemics such as the 2003 SARS epidemic and the 2009 flu pandemic, and seems to cover a Hendra virus-like threat. To devise an accurate perception of a pandemic event, Burns consulted with representatives of the World Health Organization as well as noted medical experts such as W. Ian Lipkin and Lawrence "Larry" Brilliant. Principal photography started in Hong Kong in September 2010, and continued in Chicago, Atlanta, London, Geneva, and San Francisco until February 2011.

Contagion premiered at the 68th Venice Film Festival in Venice, Italy on September 3, 2011, and went on general release on September 9. The film was acclaimed by critics, who praised the narratives and the performances of various actors and actresses. It was also well received by scientists, who praised its accuracy. Commercially, the film was a box office success. Budgeted at $60 million, Contagion took $135 million in box office revenue during its theatrical run.

Returning from a Hong Kong business trip, AIMM employee Beth Emhoff (Gwyneth Paltrow) has a layover in Chicago to rendezvous with a former lover before returning to her family in Minneapolis. She appears to have contracted a cold during her trip. Her six-year-old son from a previous marriage, Clark, also becomes sick and is sent home from school. Beth's condition worsens and two days later she collapses with severe seizures. Her husband, Mitch (Matt Damon), rushes her to the hospital, but she dies of an unknown cause.

Mitch returns home and finds that Clark has also died from a similar infection. Mitch is placed in isolation but seems to be immune to the disease. He is released and returns home to his teenage daughter Jory, (Anna Jacoby-Heron) though they are unsure if she has inherited his immunity. She decides to stay with her father regardless. Mitch struggles with learning that his wife was unfaithful, and protecting his daughter from infection. Meanwhile, everyone who had contact with Emhoff begins to spread the disease around the world.

In Atlanta, representatives of the Department of Homeland Security meet with Dr. Ellis Cheever (Laurence Fishburne) of the CDC and fear that the disease is a bio weapon terror attack over the Thanksgiving weekend. Dr. Cheever dispatches Dr. Erin Mears (Kate Winslet), an Epidemic Intelligence Service officer, to Minneapolis to begin investigating. Mears traces the outbreak to Emhoff, but after setting up triage camps in large venues, Dr. Mears becomes infected. Her evacuation is postponed, as airports close ahead of a quarantine. She later dies and is buried in a mass grave. As more and more people become infected with no cure in sight, social order begins to decay, with rampant looting of stores and homes. The U.S. President is moved underground while emergency services suffer absenteeism and no longer respond. Mitch and Jory attempt to escape to Wisconsin, but the borders are closed.

At the CDC, Dr. Ally Hextall (Jennifer Ehle) determines the virus is a mix of genetic material from pig and bat viruses. Work on a cure stalls because scientists cannot discover a cell culture within which to grow the newly named Meningoencephalitis Virus One (MEV-1). UCSF professor Dr. Ian Sussman (Elliott Gould) violates orders from the CDC to destroy his samples, and on Day 12, with over 8 million already infected, identifies a usable MEV-1 cell culture using bat cells. Hextall uses the breakthrough to start work on a vaccine. Other scientists determine that the virus is spread by fomites with a basic reproduction number of four, projecting that 1 in 12 (8.3%) of the world will be infected, with a 25–30% mortality rate.

Conspiracy theorist Alan Krumwiede (Jude Law) posts videos about the virus on his popular blog. In one video, he shows himself sick, and later shows he 'recovered' using a herbal cure derived from forsythia. In a panic, people seeking forsythia overwhelm pharmacies. Krumwiede's claims attract national attention. During a television interview, he reveals that Dr. Cheever had secretly told his fiancé to leave Chicago before the city was quarantined. Cheever is informed the government may charge him for leaking information. Later, it is revealed Krumwiede had faked being infected in an attempt to increase profits for forsythia investors. He is arrested for conspiracy, securities fraud and manslaughter, but is released when his many supporters successfully pay his bail.

Using an attenuated virus, Dr. Hextall identifies a possible vaccine. To cut out the lengthy testing process, she injects herself with it and visits her father, who is infected. Hextall does not contract MEV-1, and the vaccine is declared a success. The vaccine supply can't meet demand, so the CDC awards vaccinations with a one-year birth date lottery (first responders, doctors, and others exempt). Meanwhile, Mitch and Jory reconcile with the hope of life going back to normal.

Simultaneously, Dr. Leonora Orantes (Marion Cotillard), a WHO epidemiologist, has travelled to Hong Kong to follow the Beth Emhoff lead. She collaborates with Sun Feng, a Chinese official, and other local epidemiologists to identify Emhoff as patient zero, with security footage showing her in contact with the next three victims at a Macau casino. Before Orantes can leave, Feng kidnaps her, using her as leverage to obtain (anticipated) MEV-1 vaccines for his village. Orantes spends months living with the villagers until the vaccine arrives, and she is released. When her colleague tells her that similar kidnappings have been widespread and that the doses were placebos, Orantes rushes back to warn the villagers, with whom she had built up a caring relationship.

By Day 26, the death toll has reached at least 2.5 million in the U.S. and 26 million worldwide. The discovery, production and initial deliveries of vaccine take until Day 133, with vaccinations to run until nearly Day 500. The final death toll is not seen. In a flashback, the source of the virus is revealed: an AIMM bulldozer clears some jungle and disturbs a bat, which takes food from a banana tree. The bat flies over a pigpen, dropping a chunk of banana, which is then eaten by a piglet. A chef from the Macau casino buys the piglet. As he handles the carcass in the kitchen, he does not wash his hands when called to meet a customer – Beth Emhoff. The chef shakes hands with Beth, giving her the mix of bat and pig viruses, making her patient zero.