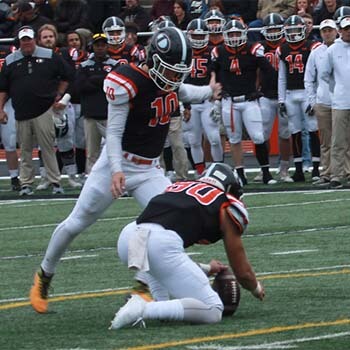 The conversion, try (American football, also known as a point(s) after touchdown, PAT, or extra point), or convert (Canadian football) occurs immediately after a touchdown during which the scoring team is allowed to attempt to score one extra point by kicking the ball through the uprights in the manner of a field goal, or two points by bringing the ball into the end zone in the manner of a touchdown.

Attempts at a try or convert are scrimmage plays, with the ball initially placed at any point between the hash marks, at the option of the team making the attempt. The yard line that attempts are made from depends on the league and the type of try or convert being attempted.

If the try or convert is scored by kicking the ball through the uprights, the team gets an additional one point for their touchdown, bringing their total for that score from six points to seven. If two points are needed or desired, a two-point conversion may be attempted by running or passing from scrimmage. A successful touchdown conversion from scrimmage brings the score's total to eight.

Whether a team goes for one or two points, most rules regarding scrimmage downs, including scoring touchdowns and field goals, apply as if it were a normal American fourth-down or Canadian third-down play. Exceptions, including cases where the defense forces a turnover during a conversion attempt, vary between leagues and levels of play. One thing that sets the try apart from other plays in the NFL is that, apart from the actual points, ordinary statistics are not recorded on the try as they would be on a regular scrimmage play. For example, on December 4, 2016, Eric Berry of the Kansas City Chiefs made an interception on a try and physically returned it 99 yards for a defensive two-point conversion. However, because it occurred on a try, Berry did not get statistical credit for the 99 yards of return yardage; nor would a player ever be credited with passing, rushing, or receiving yardage on a try.