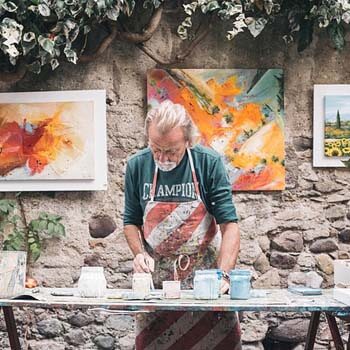 A syntactic marker. A syntactic marker in a question whose main verb is not another auxiliary verb or be. A syntactic marker in negations with the indicative and imperative moods. A syntactic marker for emphasis with the indicative, imperative, and subjunctive moods. A syntactic marker that refers back to an earlier verb and allows the speaker to avoid repeating the verb; not generally used with auxiliaries such as "be". Can refer back to "be". To perform; to execute. To cause, make (someone) (do something). To suffice. To be reasonable or acceptable. To have (as an effect). To fare, perform (well or poorly). To have as one's job. To perform the tasks or actions associated with (something). To cook. To travel in, to tour, to make a circuit of. To treat in a certain way. To work for or on, by way of caring for, looking after, preparing, cleaning, keeping in order, etc. To act or behave in a certain manner; to conduct oneself. To spend (time) in jail. To impersonate or depict. To kill. To deal with for good and all; to finish up; to undo; to ruin; to do for. To punish for a misdemeanor. To have sex with. To cheat or swindle. To convert into a certain form; especially, to translate. To finish. To work as a domestic servant (with for). Used to form the present progressive of verbs. To cash or to advance money for, as a bill or note. To make or provide. To injure (one's own body part). To take drugs. To exist with a purpose or for a reason. A party, celebration, social function. A hairdo. Something that can or should be done (usually in the phrase dos and don'ts). A deed; an act. Ado; bustle; stir; to-do; A period of confusion or argument. A cheat; a swindler. An act of swindling; a fraud or deception.