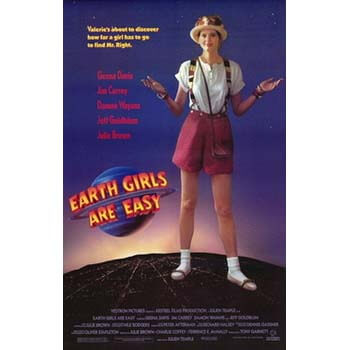 Earth Girls Are Easy is a 1988 American musical romantic comedy science fiction film that was produced by Tony Garnett, Duncan Henderson, and Terrence E. McNally and was directed by Julien Temple. The film stars Geena Davis, Julie Brown, Jeff Goldblum, Damon Wayans and Jim Carrey. The plot is based on the song "Earth Girls Are Easy" from Julie Brown's 1984 mini-album Goddess in Progress.

Three furry aliens—the blue Mac, the yellow Zeebo, and the red Wiploc—are traveling in a space ship. It has been a long time since they have had female companionship, and they receive a broadcast showing human females. They are titillated by these "hairless", shapely creatures, and when they discover that the broadcast came from Earth, they set off and land in Southern California.

Valley girl Valerie Gail is a manicurist at the "Curl Up & Dye" hair salon. When she becomes dissatisfied with the lack of sexual affection from her fiancé, medical doctor Ted Gallagher, she decides to seduce him by dressing up in lingerie and setting up some romantic touches at home. Instead, she catches him cheating on her with his nurse. She kicks him out and refuses to see him again. The next day, she is sunbathing when the aliens' spaceship crash lands in her pool. She befriends them and calls her friend Woody to come drain the pool so the aliens can work on their ship and get it flying again. Meanwhile, she brings them into her home; and, though there is a language barrier at first, the aliens prove to be quick learners and absorb American pop culture and language by watching television.

Wanting them to blend into their surroundings, Valerie takes them to her friend Candy Pink at the salon. After shaving off the aliens' fur, they turn out to be human-looking and attractive. They all go out; and party at Los Angeles nightclubs where their looks, athleticism, and incredibly long tongues soon catch the eyes of every woman in the place. Valerie and Mac begin to fall for each other and go back to Valerie's house. There, they find out that they are anatomically compatible and have sex.

The next day, the pool is drained, and Zeebo and Wiploc are working on their ship when Woody stops by and offers to take them to the beach. They agree; and, after accidentally holding up a convenience store, Zeebo and Wiploc are soon driving down the L.A. Freeway the wrong way, in reverse, with the police in pursuit. Mac finds out his crew mates are in trouble and goes to help and gets arrested along with Woody in a case of mistaken identity. Valerie smashes the police vehicle to get arrested too, so she can go with Mac.

The police pursuit ends in a crash, and Zeebo and Wiploc are taken to the emergency room. There, they are examined by Ted, who discovers they have two hearts. While he is envisioning achieving fame and fortune from his discovery, Valerie and Mac elude the police and enter the emergency room disguised as a doctor and a nurse; they manage to convince Ted he is delusional. They then escape back to Valerie's house where work continues on the space ship. Meanwhile, Valerie and Ted reconcile and plan to go to Las Vegas to get married immediately.

Mac is heartbroken and prepares the ship for take-off. Valerie comes out to say good-bye, followed by Ted, who discovers the ship. While she is struggling to keep him from calling the authorities, Valerie comes to the realization that Mac is the one she truly loves. She gets on the space ship, and they take off.