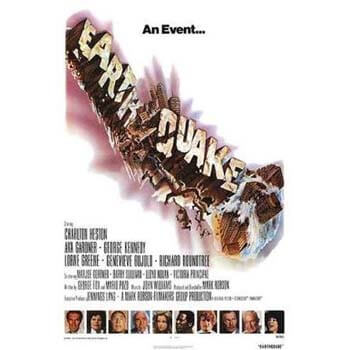 Earthquake is a 1974 American ensemble disaster film directed and produced by Mark Robson. The plot concerns the struggle for survival after a catastrophic earthquake destroys most of the city of Los Angeles, California.

Directed by Mark Robson and with a screenplay by George Fox and Mario Puzo, the film starred a large cast of well-known actors, including Charlton Heston, Ava Gardner, George Kennedy, Lorne Greene, Geneviève Bujold, Richard Roundtree, Marjoe Gortner, Barry Sullivan, Lloyd Nolan, Victoria Principal, and (under an alias) Walter Matthau. It is notable for the use of an innovative sound effect called Sensurround, which created the sense of actually experiencing an earthquake in theatres.

Early one morning, an earthquake jolts the Los Angeles metro area. On his way to work, former USC football player Stewart Graff, having just fought with his wife Remy, visits Denise Marshall, an actress who is the widow of one of his friends and co-workers. He drops off an autographed football for her son Corry and helps Denise rehearse her lines for a scene she is shooting later that day.

At the California Seismological Institute, staffer Walter Russell has calculated that Los Angeles will suffer a major earthquake within the next day or two. He frantically tries to reach his superior, Dr. Frank Adams. Another tremor hits as Adams and his assistant are working in a deep trench, and they are buried alive. The scientists at the center debate about whether or not to go public with their prediction of a major quake. The acting supervisor insists that if they are wrong, their funding will be jeopardized. They agree on a compromise to alert the National Guard and police so that they can at least mobilize to help deal with the fallout.

While checking out at a grocery store, Rosa Amici realizes she does not have enough money to pay for all her items, but Jody Joad, the store manager, says she can pay the difference next time. Joad learns that his Guard unit is being called up on the radio, so he leaves work to change into his NCO uniform. At home, his housemates harass and tease him for having posters of male bodybuilders on his wall.

The tremor cancelled Denise's shoot, so she heads to Stewart's office, pretending to meet with a friend. The pair go back to Denise's house for drinks and end up making love. He promises to come back later that night and invites her and Corry to spend the summer with him in Oregon while he oversees a project. Returning to work, his boss and father in-law Sam Royce offers to hand over the company presidency to Stewart. After asking for time to think about it, Stewart calls Denise and breaks off their plans for later that night. He goes to Sam's office to accept his offer but is stunned to see Remy there. He assumes she has convinced her father, Sam, to offer the promotion to Stewart in order to save their marriage. Stewart storms out of the building, followed by Remy, when a major earthquake measuring 9.9 on the Richter Scale strikes, destroying much of Los Angeles and killing thousands.

Sam and most of his employees find themselves trapped on the upper floors of their 30-story skyscraper. They descend most of the way by the stairs, but the earthquake has collapsed part of the stairwell. Sam rigs a fire hose to a chair and lowers his staff down one at a time. Before he can descend himself, Sam suffers a heart attack, and Stewart climbs up to rescue him. Denise's son, meanwhile, has been caught on a bridge over a spillway, which has become entangled with high voltage electric cables. Denise finds him unconscious on the concrete and climbs down to save him. Unable to climb back out with her son, she hails a passing truck, driven by stuntman Miles Quade and his partner, Sal Amici. After saving Denise and her son, they drive in search of help, coming across LAPD Sgt. Lou Slade, who is organizing rescue efforts and commandeers their truck to use it as an ambulance.

Rosa is arrested for looting by a National Guard unit led by Jody Joad. Rosa assumes Jody is going to let her go, but he orders her to stay inside a secluded store for safety. Another group of troops arrive with Jody's housemates as prisoners. Jody executes them in an act of revenge for all the ridicule he has endured from them, terrifying Rosa and his subordinates.

Stewart escorts his co-workers to the Wilson Plaza shopping center, now converted into a triage center, then goes off in search of Denise and her son. Soon after, Sam dies from his heart attack. Stewart ends up driving Lou around in search of survivors and they come across Jody and his regiment. Jody threatens to fire on them if they come any closer. Rosa emerges from the store, screaming and begging for help. Lou and Stewart drive away, but stop out of sight. Lou sneaks back and gets the jump on Jody, shooting Jody in self-defense and rescuing Rosa.

As they drive away, they hear that another aftershock has destroyed Wilson Plaza. Surveying the damaged building, Stewart realizes there are survivors trapped in an underground garage three stories below ground. He and Lou crawl into the sewer and, using a jackhammer, drill through to the garage. Stewart is overjoyed to find Denise, who is one of the people trapped inside. As he hugs her, he sees his wife Remy standing just behind her.

The Mulholland Dam, damaged by the earlier tremor, finally gives way, flooding the sewers. Lou and Denise make it up the ladder to safety, but as Remy climbs out, a man steps on the rung she's holding and she falls back into the flooded sewer. Stewart looks up at Denise, but he cannot bring himself to abandon his wife to death. He sacrifices himself when he swims after her and both of them are swept away, along with others. Denise walks away from the manhole in shock and grief.

Dr. Vance turns to Slade, and says: "This used to be a hell of a town, officer." "Yeah," replies Slade, as tears well up in his eyes. Meanwhile, the remaining survivors take in the devastated Los Angeles cityscape.