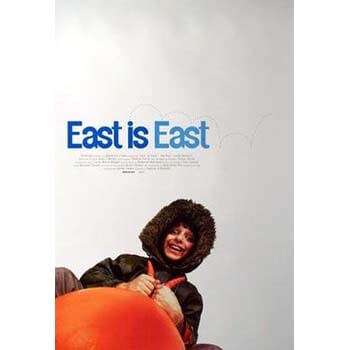 East Is East is a 1999 British comedy-drama film written by Ayub Khan-Din and directed by Damien O'Donnell. It is set in Salford, Lancashire, (now in Greater Manchester), in 1971, in a mixed-ethnicity British household headed by Pakistani father George (Om Puri) and an English mother, Ella (Linda Bassett).

East Is East is based on the play East is East by Ayub Khan-Din, which opened at the Birmingham Repertory Theatre in October 1996 and Royal Court Theatre in November 1996. The title derives from the Rudyard Kipling poem The Ballad of East and West, of which the opening line reads: "Oh East is East, and West is West, and never the twain shall meet".

George Khan is a Pakistani Muslim who has lived in Britain since 1937. He has a wife in Pakistan. He and his second wife Ella, a British Roman Catholic woman of Irish descent, have been married for twenty-five years and have seven children; Nazir, Abdul, Tariq, Maneer, Saleem, Meenah (the only daughter) and Sajid. George and Ella run a popular fish and chip shop.

While George is obsessed with the 1971 war between East and West Pakistan and arranging marriages for his children, the children themselves, born and brought up in Britain, increasingly see themselves as British and reject Pakistani dress, food, religion and living. After George disowns Nazir for running out on his arranged marriage, he immediately begins making plans to have another of his children married to maintain his image.

On a trip to Bradford, George is introduced to Mr Shah, a fellow Pakistani Muslim who wishes to marry off his two unattractive daughters. George arranges in secret for his second and third sons, Abdul and Tariq, to marry them, despite Ella's misgivings, a conversation that the youngest child, Sajid, overhears. During a quarrel, Sajid reveals the arranged marriages to his brothers; Tariq, the most rebellious son and in a relationship with a local girl, flies into a rage and defiles the wedding garments George had bought. The most obedient son, Maneer, is caught by George trying to tidy the mess up and beaten when he refuses to tell George who was responsible; Ella intervenes and is also beaten. Tariq travels to Eccles and tracks down Nazir, who is in a homosexual relationship and returns to confront George for his actions. However, upon seeing Ella's and Maneer's bruises, he becomes frightened his appearance will anger George further and make the situation worse for his siblings and his mother. Ella urges him to go, so he obeys her wish and flees before George catches sight of him. After a heated argument with his father, Tariq reluctantly agrees to go along with the marriage.

Mr and Mrs Shah arrive with their daughters to meet George's family. Ella maintains her composure despite Mrs Shah's condescending and rude attitude, but things come to a head when a scuffle ensues over a sculpture of a vagina and Saleem accidentally drops it on Mrs Shah's lap. Angered, Mrs Shah insults George's entire family and is ejected from the house by Ella along with her husband and daughters. Enraged, George attacks Ella but is stopped by Abdul and the other children long enough for him to see how his actions have turned his entire family against him, and leaves the household in shame to seek solace in his shop.

In the aftermath, George and Ella make amends over tea while the kids play in the street.