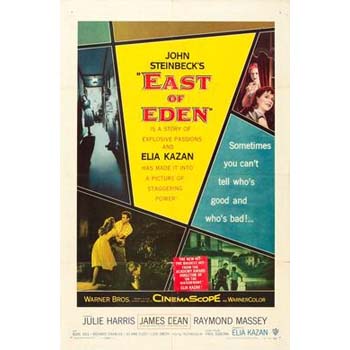 East of Eden is a 1955 drama film, directed by Elia Kazan, and loosely based on the second half of the 1952 novel of the same name by John Steinbeck. It is about a wayward young man who, while seeking his own identity, vies for the affection of his deeply religious father against his favored brother, thus retelling the story of Cain and Abel.

Although set in early 20th century Monterey, California, much of the film was actually shot on location in Mendocino, California. Some scenes were filmed in the Salinas Valley.

Of the three films in which James Dean played the male lead, this is the only one to have been released during his lifetime and the only one Dean personally viewed in its entirety.

The film, along with Dean's other films Rebel Without a Cause and Giant, has been named by the American Film Institute as one of the best 400 American films of all time. In 2016, the film was selected for preservation in the United States National Film Registry by the Library of Congress as being "culturally, historically, or aesthetically significant".

The story is set in 1917, during World War I, in the central California coastal towns of Monterey and Salinas. Cal and Aron are the young adult sons of a modestly successful farmer and wartime draft board chairman named Adam Trask. Adam is a deeply religious man. Cal is moody and embittered by his belief that his father loves only Aron.

The Trask family has a farm in the fertile Salinas valley. Although both Cal and Aron had long been led to believe that their mother had died "and gone to heaven", the opening scene reveals that Cal has apparently come to realize that she is still alive, owning and running a successful brothel in nearby Monterey.

After the father's idealistic plans for a long-haul vegetable shipping business venture end in a loss of thousands of dollars, Cal decides to enter the bean-growing business, as a way of recouping the money his father lost in the vegetable shipping venture. He knows that if the United States enters the war, the price of beans will skyrocket. Cal hopes this will finally earn him the love and respect of his father. He goes to his mother Kate to ask to borrow the capital he needs. She reluctantly lends him the five thousand dollars.

Meanwhile, Aron's girlfriend Abra gradually finds herself attracted to Cal, who seems to reciprocate her feelings.

Cal's business goes quite well, and he decides to give the money to Adam at a surprise birthday party for his father, which he and Abra plan together. As the party gets underway, Aron suddenly announces that he and Abra are engaged. While Adam is openly pleased with the news, both Abra and Cal are uneasy, having recently discovered a mutual attraction for one another is emerging, despite their suppressed feelings. Cal makes a surprise birthday present of the money to his father; however, Adam refuses to accept any money earned by what he regards as war profiteering. Cal does not understand, and sees his father's refusal to accept the gift as just another emotional rejection. When the distraught Cal leaves the room, Abra goes after him, to console him as best she can. Aron follows and orders Cal to stay away from her.

In anger, Cal takes his brother to see their mother, then returns home alone. When his father demands to know where his brother is, Cal tells him. The shock drives the pacifistic Aron to get drunk and lose his mind and then board a troop train to enlist in the army. When Sam, the sheriff, brings the news, Adam rushes to the train station in a futile attempt to dissuade him, he fails and can only watch helplessly as his son steams away from him with his head out the rail car window maniacally laughing at him. The old man then suffers a stroke, which leaves him paralyzed and unable to communicate. Cal tries to talk to him, but gets no response and leaves the bedroom. Abra pleads with Adam to show Cal some affection before it is too late. She persuades Cal to go back into the room. When Cal makes his last bid for acceptance before leaving town, his father manages to speak. He tells his son to get rid of the annoying nurse and not to get anyone else, but to stay and take care of him himself. The film ends with Cal, alone, sitting by his father's bedside, the emotional chasm between the father and son apparently closing.