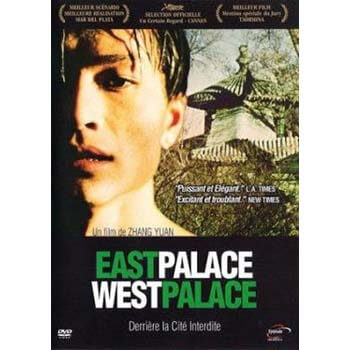 East Palace, West Palace (Dong gong xi gong) is a 1996 Chinese film directed by Zhang Yuan starring Hu Jun and Si Han and based on a short story by the cult writer Wang Xiaobo. It is also known as Behind the Forbidden City or Behind the Palace Gates.

East Palace, West Palace is the first Mainland Chinese movie with an explicitly homosexual theme. The title of the movie derives from the two parks near the Forbidden City — the East Palace and the West Palace. The two parks, specifically their public washrooms, are notorious for being places of congregation for the homosexuals in Beijing during the night.

The film was shot in the spring of 1996, when it was smuggled out of China for post-production in France. It premiered at the Mar del Plata Film Festival in Argentina in November 1996 and at the 1997 Cannes Film Festival as part of the Un Certain Regard competition.

In China, homosexuality isn't illegal, but homosexuals are routinely persecuted by police and arrested for "hooliganism". The film focuses on a young gay writer called A-Lan who, being attracted to a young policeman named Xiao Shi, manages to have himself arrested and interrogated for a whole night. His life-story which he tells during the interrogation reflects the general repression of the Chinese society. Xiao Shi's attitude shifts from the initial revulsion to fascination and, finally, to attraction.