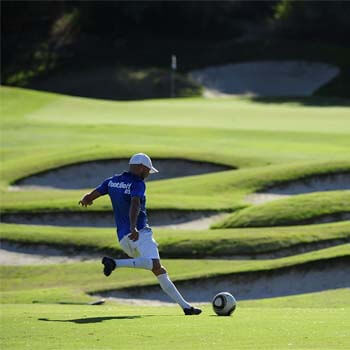 Footgolf is a precision sport, in which players kick a spherical association football into a cup in as few shots as possible. The name is a portmanteau of football and golf, and the game combines the two sports, being more closely related to golf.

The game is played similarly to golf, with the exception that players use a soccer ball instead of a golf ball, and the ball is kicked rather than struck with a club, working toward a 21-inch "cup" in place of the usual golf hole. The player who finishes the course with the fewest shots wins. Indeed, footgolf is often played on golf courses, though it may also be played on specially built grass footgolf courses. The first shot has to be played from the tee box, and bunkers, trees, water and hills must be crossed or avoided in order to reach the hole.

The game is played with a regulation No. 5 soccer ball. As football-soccer balls cannot be propelled as far as golf balls in one shot, footgolf is played on holes shorter than those used in golf. For instance, one course in California features holes that average 157 yards. Pars are typically 5 shots or fewer. Paul Collinson of the UK Footgolf Association has observed that, compared to golf, footgolf is quicker to play, more accessible, and does not require expensive equipment.

The AFGL requires "classic golf uniform with wearing indoor soccer or turf shoes" for tournament play, and notes that most golf courses have a dress code for golfers, which footgolf players would also have to follow.