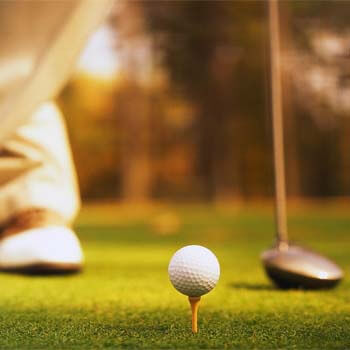 A foursome, also known as alternate shot, is a type of match in the sport of golf.

Golfers compete in teams of two, using only one ball per team, and taking alternate shots until the hole is completed. Team members take turns in teeing off on each hole, i.e. one player will take the tee shot on odd-numbered holes, and the other on even-numbered holes.

Foursomes is commonly played as match play, with each hole being won by the team that completes it in the fewest shots. This form of golf is often played in team golf competitions such as the Ryder Cup, Solheim Cup, Seve Trophy, and the Presidents Cup. Foursomes can also be played in stroke play competitions, with the winners being the team who have taken the fewest strokes to complete a set number of holes.

Greensomes, also known as Scotch Foursomes, follows the same format as foursomes except that both players tee off on every hole. The better ball is chosen and alternate strokes are then played to complete the hole. Bloodsomes follows the same format as greensomes except the opposition pairing choose which ball is played. Chapman, also known as Pinehurst System or American Foursomes, is a combination of alternate shot and fourball. The pair plays two balls for two shots each, and then pick the best ball for the third shot, to be played by the player who drove it. It is named after American amateur golfer Dick Chapman.