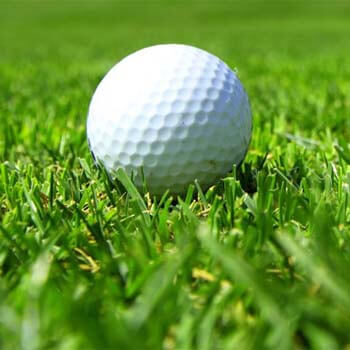 A golf ball is a special ball designed to be used in the game of golf.

Under the rules of golf, a golf ball has a mass no more than 1.620 oz (45.93 grams), has a diameter not less than 1.680 in (42.67 mm), and performs within specified velocity, distance, and symmetry limits. Like golf clubs, golf balls are subject to testing and approval by the R&A (formerly part of the Royal and Ancient Golf Club of St Andrews) and the United States Golf Association, and those that do not conform with regulations may not be used in competitions (Rule 5–1).

There are many types of golf balls on the market, and customers often face a difficult decision. Golf balls are divided into two categories: recreational and advanced balls. Recreational balls are oriented toward the ordinary golfer, who generally have low swing speeds (80 miles per hour (130 km/h) or lower) and lose golf balls on the course easily. These balls are made of two layers, with the cover firmer than the core. Their low compression and side spin reduction characteristics suit the lower swing speeds of average golfers quite well. Furthermore, they generally have lower prices than the advanced balls, lessening the financial impact of losing a ball to a hazard or out of bounds.

Advanced balls are made of multiple layers (three or more), with a soft cover and firm core. They induce a greater amount of spin from lofted shots (wedges especially), as well as a sensation of softness in the hands in short-range shots. However, these balls require a much greater swing speed that only the physically strong players could carry out to compress at impact. If the compression of a golf ball does not match a golfer's swing speed, either the lack of compression or over-compression will occur, resulting in loss of distance. There are also many brands and colors to choose from, with colored balls and better brands generally being more expensive, making an individual's choice more difficult.

A practice ball or range ball is similar to a recreational golf ball, but is designed to be inexpensive, durable and have a shorter flight distance, while still retaining the principal behaviors of a "real" golf ball and so providing useful feedback to players. All of these are desirable qualities for use in an environment like a driving range, which may be limited in maximum distance, and must have many thousands of balls on-hand at any time that are each hit and mis-hit hundreds of times during their useful life.

To accomplish these ends, practice balls are typically harder-cored than even recreational balls, have a firmer, more durable cover to withstand the normal abrasion caused by a club's hitting surface, and are made as cheaply as possible while maintaining a durable, quality product. Practice balls are typically labelled with "PRACTICE" in bold lettering, and often also have one or more bars or lines printed on them, which allow players (and high-speed imaging aids) to see the ball's spin more easily as it leaves the tee or hitting turf.

Practice balls conform to all applicable requirements of the Rules of Golf, and as such are legal for use on the course, but as the hitting characteristics are not ideal, players usually opt for a better-quality ball for actual play.

Players, especially novice and casual players, lose a large number of balls during the play of a round. Balls hit into water hazards, penalty areas, buried deeply in sand, and otherwise lost or abandoned during play are a constant source of litter that groundskeepers must contend with, and can confuse players during a round who may hit an abandoned ball (incurring a penalty by strict rules). An estimated 1.2 billion balls are manufactured every year and an estimated 300 million are lost in the US alone.

A variety of devices such as nets, harrows, sand rakes etc. have been developed that aid the groundskeeping staff in efficiently collecting these balls from the course as they accumulate. Once collected, they may be discarded, kept by the groundskeeping staff for their own use, repurposed on the club's driving range, or sold in bulk to a recycling firm. These firms clean and resurface the balls to remove abrasions and stains, grade them according to their resulting quality, and sell the various grades of playable balls back to golfers through retailers at a discount.

Used or recycled balls with obvious surface deformation, abrasion or other degradation are known informally as "shags", and while they remain useful for various forms of practice drills such as chipping, putting and driving, and can be used for casual play, players usually opt for used balls of higher quality, or for new balls, when playing in serious competition. Other grades are typically assigned letters or proprietary terms, and are typically differentiated by the cost and quality of the ball when new and the ability of the firm to restore the ball to "like-new" condition. The "top grade" balls are typically balls that are considered the current state of the art and, after cleaning and surfacing, are indistinguishable externally from a new ball sold by the manufacturer.

In addition to recycled balls, casual golfers wishing to procure quality balls at a discount price can often purchase "X-outs". These are "factory seconds"; balls which have failed the manufacturer's quality control testing standards and which the manufacturer therefore does not wish to sell under its brand name. To avoid a loss of money on materials and labor, however, the balls which still generally conform to the Rules are marked to obscure the brand name (usually with a series of "X"s, hence the most common term "X-out"), packaged in generic boxes and sold at a deep discount.

Typically, the flaw that caused the ball to fail QC does not have a significant effect on its flight characteristics (balls with serious flaws are usually discarded outright at the manufacturing plant), and so these "X-outs" will often perform identically to their counterparts that have passed the company's QC. They are thus a good choice for casual play. However, because the balls have been effectively "disowned" for practical and legal purposes by their manufacturer, they are not considered to be the same as the brand-name balls on the USGA's published Conforming Golf Ball List. Therefore, when playing in a tournament or other event that requires the ball used by the player to appear on this list as a "condition of competition", X-outs of any kind are illegal.