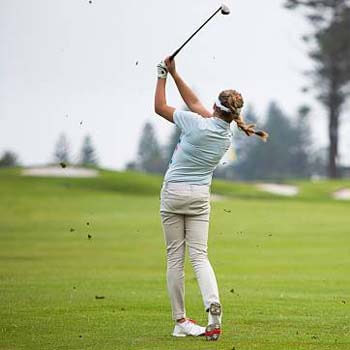 Golf etiquette refers to a set of rules and practices designed to make the game of golf safer and more enjoyable for golfers and to minimize possible damage to golf equipment and courses. Although many of these practices are not part of the formal rules of golf, golfers are customarily expected to observe them. The R&A rule book states that "[t]he overriding principle is that consideration should be shown to others on the course at all times."

Divots should always be repaired, either by placing sand in the divot or replacing the grass, preferably with a driver. Some courses also place containers of divot repair mix on carts and at tees, which can be poured into the divot.

Golfers should avoid distracting fellow golfers. Golfers should not run during play, but instead walk quickly but lightly during play and remain stationary while others play their shots. Players should be still and remain silent during a fellow player's pre-shot routine and subsequent shot.

Golf carts should not be used to annoy or distract other players. The cart should be parked on the cart path when at the tee box or putting green. Carts should normally stay only on the paths, and are required to do so on many courses. Golfing equipment (bags, clubs and carts) should never be placed in front of the green as annoyance to the approaching players.

Should carts be permitted off the paths, golfers should observe the "90 degree rule": make a 90 degree turn off the path toward the fairway to a given ball, and return straight back to the path, not along the path of greatest convenience. Carts inflict wear and tear on the course, and can be accidentally driven over another player's ball. Golfers should keep the noise of backing up to a minimum and must always set the park brake before disembarking.

The player with the best gross score on the previous hole has the honour of teeing off first. If there is no outright winner of a hole, then the order of play does not change from the previous tee. In informal games one can play ready golf and not wait for the best score on the hole to tee up first.

A golfer should always know which brand of ball he or she is using, or mark it to avoid confusion during play.

In the tee box, other players should stand alongside the person playing, out of the way and not behind the player getting ready to swing. Should the player about to play the ball ask his partners to move, the request should be honoured.

A ball hitting the green often leaves an indentation, a pitch mark, where it strikes the ground. These need to be repaired to keep the green in good condition. After golfers have arrived at the green, they should make it a point to find their pitch marks and repair them. This will help keep the greens flat for other players.

Golfers should note each player's putting line, and avoid stepping on it as they play on the green or stand on a line of sight, that is, in the line of sight either ahead or behind a player who is attempting to putt. Players should not stand close to or directly behind the ball, or directly behind the hole, when a player is about to play. In the event that your ball is in another player's line, it is important to mark your ball's position, and only then remove it (pick it up) from the green.

A second but related concern involves the hole itself. A golfer should avoid stepping within at least a one-foot radius of the hole.

According to the rules of golf, a player is not allowed to "ground" the club in any type of hazard. This means that a player getting ready for a shot cannot allow the club to touch the ground, sand, water, or anything else during a practice swing. A player is allowed to thrash as much sand, water, etc., as necessary during the actual shot.

A player should always enter and leave a bunker from the low side. After the shot, a player should rake the sand smooth again to leave a fresh surface for other players. Normally, the rake should be replaced alongside the bunker, not inside it.

Not all bunkers must be raked; anything deemed a waste trap does not need to be raked. Waste traps can be determined by signs or by the overall condition of the bunker. These bunkers are common in coastal courses (i.e. Myrtle Beach), and at some courses players may be permitted to drive carts in these bunkers. Players may also ground clubs in all waste bunkers. If players are unsure whether or not the bunker is a waste bunker, assume it is a regular bunker.

Slower players should allow following faster players to play through if there is substantial room in front of them. Golfers should try to follow closely the group ahead of them, and not to be "pushed" by the group behind them.

A golfer should choose the correct tee for their skill level, regardless of where the other members of the group are playing. The different tee lengths are one way to help even the playing field. A golfer should tee the ball between the two markers, within 2 club lengths behind. Should a golfer address the ball, swing and miss, the golfer incurs no penalty (but the stroke counts).