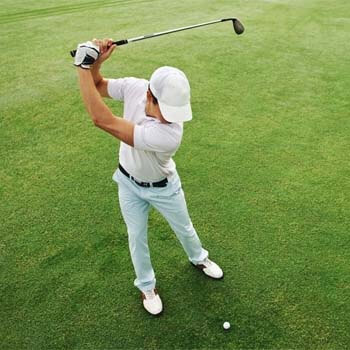 Golf stroke mechanics is the means by which golfers make decisions (selecting clubs, selecting shots) and execute them (making shots) in the sport of golf. For all golfers, it consists of a pre-stroke, in which golfers choose which club they want and their stance, and the actual stroke. The stroke is a complex motion and there is still disagreement on what constitutes a "good" golf swing. In Work and Power Analysis of the Golf Swing, Nesbit and Serrano suggest the golf swing has been studied by scientists and mathematicians who have developed various equations to help explain the complexity of the swing. It is generally agreed that a successful and consistent golf swing requires precise timing and mechanics, from the grip and position of one's fingers, to the position and movement of the feet. At any moment of the swing, whether back-swing, downswing, or upswing, something can go wrong that will throw off the whole body and result in a mishit. The entire swing motion should move on a plane in a fluid manner. The plane can be characterized as horizontal or vertical.

The goal of the golf swing is to direct as much kinetic energy as possible into the club head so when it comes into contact with the ball, all of the energy will transfer to the ball, sending it into flight. The complex motion of the body first starts with the stance. This is critical to make sure the golfer has a low center of gravity to remain balanced throughout the swing path. The swing starts with the arms moving back in a straight line. When the club head reaches the level of the hip, two things happen: there is a stern wrist cock that acts as a hinge along with the left knee (for a right-handed swing), building up its torque by moving into the same line as the belly button before the start of the upswing. As the swing continues to the top of the backswing (again for right-handed golf swing), the golfer's left arm should be perfectly straight and his right arm should be hinged at the elbow.

The downswing begins with the hips and the lower body rather than the arms and upper body, with emphasis on the wrist cock. As the golfer's hips turn into the shot, the right elbow will drop straight down, hugging the right side of the golfer's torso. As the right elbow drops, the wrists begin to snap through from the wrist cock in the backswing. A solid extension of the arms and good transfer of body should put the golfer leaning up on his right toe, balanced, with the golf club resting on the back of the golfers neck. Importantly, all of the movements occur with precise timing, while the head remains completely still with eyes focused on the ball throughout the entire swing.

A golf stroke uses muscles on core (especially erector spinae muscles and latissimus dorsi muscle when turning), hamstring, shoulder and wrist. Stronger muscles on wrist can prevent wrists from being twisted at swings, while stronger shoulders increase the turning force. Weak wrists can also deliver the impacts to elbows and even neck and lead to injury of them. (When a muscle contracts, it pulls equally from both ends and, in order to have movement at only one end of the muscle, other muscles must come into play to stabilize the bone to which the other end of the muscle is attached.) Golf is a unilateral exercise that can break body balances, requiring exercises to keep the balance in muscles. A recommended exercise is free weight, an exercise not reliant on machines to stimulate and balance the fine muscles.

A good golf swing starts with proper posture. Having a proper posture means standing upright with a relatively straight back and slightly bent knees. When a golfer takes the stance, the width of the stance should be about shoulder wide and arms should be hanging free. Slightly more weight is placed on the front foot for short irons, with balance shifting onto both feet through the middle irons until weight is distributed fairly evenly for long irons and woods.

At address the body is positioned parallel to the target line, although stance can be adjusted for different shots; in general the body and stance should be parallel to the target line. The ball is positioned near the center of the player's stance for short irons, moving forward of center through the middle and long irons until it is opposite the heel of the front foot for woods.

There are several choices with regard to gripping the club. Generally one of the following three will be used:

Timing is the most critical element of the golf swing because it connects all of the different moving parts of the body into one motion. "On the backswing aka the first part of the swing, the order of movement goes like this: hands, arms, shoulders, hips" (Ben Hogan: Five Lessons: the Modern Fundamentals). The downswing (the second part of the swing) is initiated by the unwinding of the hips. Then the shoulders and arms follow.

The golf swing is capable of producing great force, though it takes practice to be able to effectively utilize it in a productive manner. Most amateur golfers try to get as much power as possible, and try to hit the ball as far as possible but this is not an appropriate approach for an amateur. The power of the golf swing is not unlocked by muscle or by fastest club head speed, but by the precise timing and mechanics of a motion that has to be put together in harmony. However, more power in the golf swing can be attributed to the development of these lower limb muscles: tibialis anterior, peroneus longus, gastrocnemius medialis, gastrocnemius lateralis, biceps femoris, semitendinosus, gluteus maximus, vastus medialis, rectus femoris and vastus lateralis. With more power, comes the necessity for more control over the body that a golfer must have to control the motions of the swing. "Strength and inertial variations seem more likely than size to account for long and short hitting".

The chip is a type of shot generally used from short range around the green usually under 40 yards. Although any club may be used, and there are specialist chipping clubs (or chippers) available, a short iron or wedge is most common. The goal of the chip is to land the ball safely on the green and let it roll out towards the hole.

A "pitch shot" is a shot played with a high lofted club, typically a pitching wedge, utility wedge or sand wedge, with lofts ranging from 56° to 62° degrees. These high lofted clubs are designed to hit the ball high from short distances, usually from 40-50 yards (30-50 meters) and closer.

The putt is used for putting the ball in the hole or closer to the hole (as in lagging) from the green or the fringe of the green. The putter is used for the putt. The golfer adjusts his/her putt to fit the circumstances of the play such as distance to the hole and slope of the green. The face of the club starts square to the target line. The club goes straight back and straight through along the same path like a pendulum. One strategy is to aim the ball 10% past the hole. Another is to look at the hole for long putts instead of the ball.