How to Ask Rich People for Money 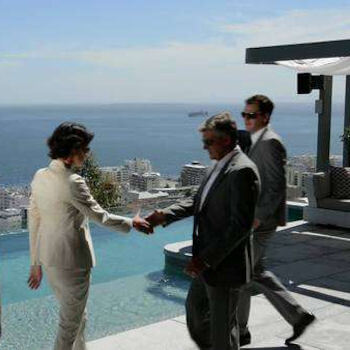 Fundraising for charity is an important part of any nonprofit group's work. In the U.S. alone, donors gave almost $287 billion in 2011. Many people who work for nonprofits feel uncomfortable asking donors for money, but without their help most nonprofit groups would not be able to carry out their missions. Learning how to effectively and respectfully ask wealthy individuals for money can help you ensure your charity or favorite nonprofit, federally recognized as 501 (c) (3), group prospers and is able to help those in need.

1. Compile a list of donors. Before you begin asking for money, it's best to have an idea of who you're going to ask for donations. If you're going door-to-door, that may be as simple as deciding which neighborhood(s) to work in. If you're soliciting donations by phone or by mail, though, you'll need a list of prospective donors to contact.

If you can identify past donors on your list of people to call or write to, you may want to prioritize those individuals as "best bets" - these are people who, given their history of donating in the past, will most likely contribute again to your cause.

Try to identify which people on your list are the most financially stable. You can do this by interacting with the individual to get a sense of his or her finances, or if going door-to-door, look at the houses residents live in and the cars in their driveways. People with large, elaborate homes or flashy sports cars most likely have more disposable income. (Though of course this doesn't guarantee that they will give donations.)

Consider using analytical software and services, such as Donor Search, to identify which potential donors are more wealthy and more likely to donate.

Remember to think "ABC" when identifying donors: Able to make a gift, Belief (known or potential) in your cause, and Contact/Connection with your organization.

2. Get to know your donors. If your organization has dealt with donors in the past, you or a colleague will probably know what strategies work best in making your appeal. Some people want to know how the money from last year was spent, while others may simply want to know how much is needed. Certain donors may have fears or reservations about donating, and it's important to learn to recognize those fears/reservations so you can address them in advance.

Some donors may need to hear particular terms or phrases in order to be persuaded to donate. If you know this to be the case, make some indication of this on your list so that when you call or approach that person, you'll know what to say.

Any time a donor seems reluctant to give but gives anyway, make a note of that situation on your list or in that donor's file (if you have one). Listen to what the individual says when he or she is reluctant, and try to find ways to assuage those fears - not just for this year's fundraiser, but for future years as well.

Be aware that many well-known philanthropists hire other individuals to manage donations and contributions. Because of this, you may not get to speak to the actual donor himself/herself. However, the employees hired by a philanthropist probably have the same concerns that the philanthropist does, and you may have some luck appealing to the philanthropist's interests through his or her employees.

3. Find ways to present your organization. People who have donated to your organization will no doubt be familiar with who you are (as an organization) and what you do. But what about people who have never donated before? How will you describe what you do to an outsider? This is important, as it may determine whether the individual will listen to the rest of your pitch. If possible, try to compile some data on what your organization has done in the past, the problems you hope to address after this fundraising drive, and how that prospective donation would help your cause.

Try to present your organization in a way that both explains what you do while also highlighting the issue you seek to change. For example, you might say something like, "Did you know that [the issue your organization addresses] affects a significant portion of the city, and we are the only organization solely committed to addressing these issues in a comprehensive way?"

It's not a requirement to have data compiled, but for individuals who aren't familiar with your organization, it may be very helpful to know that information.

The better your donor base understands your organization - and the better you understand your donors - the more likely you'll be to build a long-term relationship with that donor.

Remember that the best appeal will educate the potential donor, rather than making a simple sales pitch.

Practice your appeal out loud. Get comfortable with the speech, and learn to adapt it to your own style of speaking. Make it your own speech, and try to make it feel comfortable and unrehearsed (even though this may take a lot of rehearsal).

Practice in front of a mirror if you will be interacting with donors face-to-face.

Try recording yourself, either with a tape recorder or on video, and study your mannerisms and your speech patterns. Does it sound honest? Do your vocal patterns and your physical mannerisms communicate the message of your organization, and the urgency of what you're trying to solve?

1. Start a conversation. Don't just call and start running in with your pitch. Work on creating a dialogue with the potential donor, which may mean making some polite small talk at the start. It can be as simple as asking the person how his or her day is going. Anything to start a conversation should help disarm the individual, and make the person realize that you're a caring and concerned member of the community.

If the prospective donor is a known philanthropist, he or she may prefer to have someone who heads the foundation ask for a donation. Statistically, donors are more likely to give money to a recognizable figure affiliated with an organization, rather than to a fundraiser who contacts them on the organization's behalf.

Initiate the conversation by getting the prospective donor to acknowledge an existing problem. If you're raising money for a local organization, you might open the conversation by asking what he or she thinks is the greatest crisis facing your region.

If the individual feels like you're just having an aimless conversation and then suddenly he or she is asked for money, it may create tension and cause the person to feel like you're shaking them down. Be calm, friendly, and casual, but don't drag your feet about making it clear that you have a purpose.

3. Let the other person speak. Chances are, if you launch into your usual appeal to a person on the street who's never donated before, that person will walk away. But if you have created a dialogue, and made room for the other person to speak, you may be able to get that individual to feel engaged and a part of the solution.

Try asking a question. Say something like, "What do you think is the biggest problem our community faces?" Once the person has answered, instead of simply saying, "Yes, you're right. Will you consider donating?" try a more nuanced approach. After the person says what he or she sees as the problem, just say, "How interesting!" and keep silent while remaining interested.

People fear silence, and the person will probably fill that gap by elaborating on why that issue is important. That potential donor may go on to talk about how a family member has been affected by those issues. This gives you an in to take the specific concern he/she has and run with it. It's no longer an abstract concern, but a specific problem that may have affected the individual personally.

4. Make a specific request. If you leave a donation appeal open-ended, the person may not end up donating, or may only give a few dollars. But if you ask for a specific amount, it takes a lot of guess work out of the equation for that individual, and makes it easier to commit to your request. For example, if the person seems interested, say something like, "Well, we can make a difference. For just _____ dollars, you can help accomplish ___________."

5. Be persistent. Many people will say no right off the bat, but others may simply need to be persuaded a bit more. Perhaps someone might say that the amount you requested is too high. If that happens, let the person know that any donation amount would be a big help, and ask if there's a slightly lower amount that the person would be willing/able to donate.

Don't be aggressive with your appeal, but do be insistent that your cause is worthy and that any donation amount would help that cause.

6. Thank the person either way. If the individual is willing to donate, then it's cause for celebration. You can thank the person and let him or her know that that donation will go a long way towards solving or addressing the issue at hand. But even if the person is not interested in donating, you should still be polite and appreciative of their time. Simply say, "Well, thank you for your time and have a wonderful day."

Expressing gratitude and courtesy can go a long way. Just because someone isn't interested in donating, that doesn't mean the situation won't change. Perhaps next year the people who said no will have heard or read more about your organization, or perhaps the individual will have been personally affected by the issue you're seeking to address. Making a good impression now, even when turned down, may be what helps you get a donation next year.

7. Follow up with donors. If someone gave a donation, you should absolutely express gratitude. Send the donor a thank-you letter and a gift receipt (in case they want to write it off on their taxes or simply have a record of the donation). It's best to send these items as quickly as possible so that the donor knows that the contribution was greatly appreciated and will be put to good use.

Tags: Money, How To, Fundraise